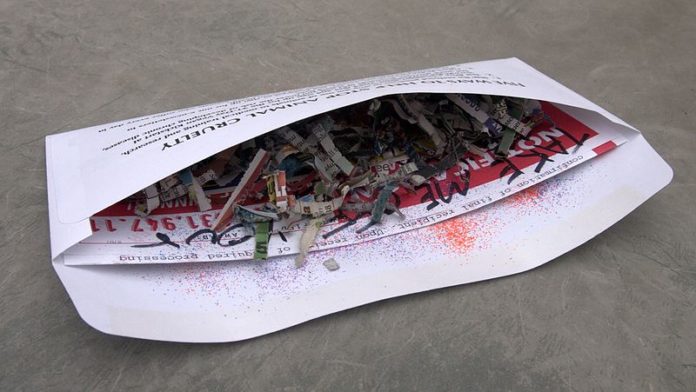 Members of a “Straight Pride” group that wants to hold a parade in Boston to show off their anti-gay hate received bombs in the mail Monday.

No, not real bombs. Just the glitter kind. Nevertheless, those who received them freaked out and called the police.

The envelopes containing the glitter were unaddressed, but were most likely sent to these bigots in protest of their effort to stage a parade in Boston, which they seem to be doing because they ludicrously think straight people are discriminated against.

John Hugo, the creator of the group, laughably claimed that straight people are an “oppressed minority” on the Super Happy Fun America group website last month.

“Straight people are an oppressed majority,” he wrote. “We will fight for the right of straights everywhere to express pride in themselves without fear of judgment and hate. The day will come when straights will finally be included as equals among all of the other orientations.”

The letters contained glitter, which is often used to “glitter bomb” homophobes to publicly shame them for their prejudice. Letters were also in the envelopes, but law enforcement has not revealed what they say.

Presumably, the letters tell the Straight Pride organizers exactly where they can stick their parade.

“I went out to my mailbox and there was an envelope in there with my name and address, no return address, the back was very heavily taped up and when I shook it I heard stuff shaking around inside,” group member Samson Racioppi told CNN.

Another group member, Mark Sahady, also received a letter. And he believes the letters are being sent because of the parade.

“It got a lot of news coverage, so it obviously had to do with the parade,” Sahady said.

Thus far, the Straight Pride group has only managed to make it past the application approval stage to hold their parade on August 31st. They still need approval from police captains, a permit from the licensing board and an entertainment license before they can proceed.

Whether they will be successful or not remains to be seen, but the only ones really complaining about getting glitter in the mail are the bigots.

In short, this is a real case of ‘Nothing to see here, folks. Move along.’