The United States Blues
Home Environment Students around the world skip school to call for action on climate... 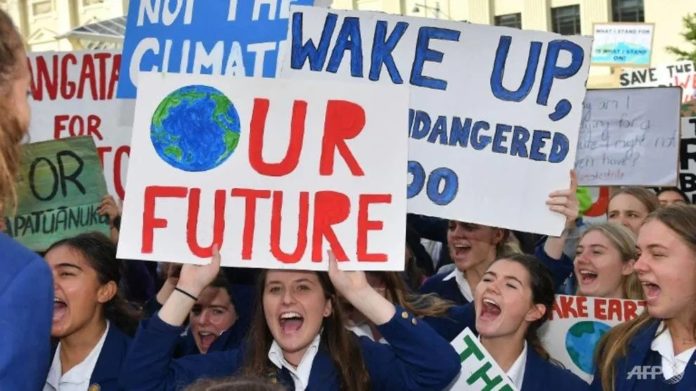 It was one of the largest turnouts so far in a months long movement that included the U.S. for the first time, in an event organizers call the “U.S. Youth Climate Strike.”

The protests began last summer with teenager Greta Thunberg in Sweden, and gained attention when she delivered a powerful speech at the United Nations climate summit in December, chastising delegates for not doing more.

Thunberg took part in a rally in Stockholm, just days after it was announced that she had been nominated for a Nobel Peace Prize. During the Stockholm event, Thunberg called climate change an “existential crisis” that’s been “ignored for decades by those that have known about it.”

Turnout across the world for the student protests was said to be substantial, with young people gathering in South Africa, India, New Zealand, and South Korea. In Europe, students held rallies in Lisbon, Vienna, Rome, and Copenhagen, among other cities:

In London, one banner read, “We’re missing lessons to teach you one.” In Berlin, students chanted, “We are here, we are loud, because you are stealing our future.”

All of this comes after a recent warning from the United Nations that the nations of the world must actively work to substantially reduce greenhouse gas emissions by no later than 2030 to avoid the worst effects of climate change such as drought, wildfires, and flooding.

One of the protesters who took part in the U.S. was 12-year-old Haven Coleman of Denver, who commented:

“I’ve always been passionate about fixing something when I see something is wrong. I ended up saving one manatee. His name is Cheese. He’s adorable.”

If this strike fails to cause actions by legislators, organizers said they have another planned in May, with Coleman noting:

“Because you’re not really listening to us now, so this is the radical stuff that we need to do to get your attention.”