The United States Blues
Home News Sunny Hostin gives Alan Dershowitz a lesson on the law during his... 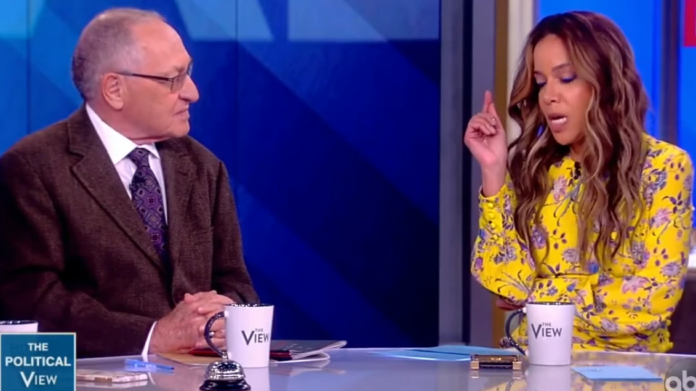 Harvard Law professor Alan Dershowitz got a lot more than he bargained for when he showed up on “The View” Thursday to discuss the findings found in the report from Special Counsel Robert Mueller, and he also got a lecture on the law from co-host Sunny Hostin, who just so happens to be a very accomplished attorney herself.

The debate began when Dershowitz plugged his new book about the Mueller report and declared that no president can obstruct justice for actions authorized in Article II of the U.S. Constitution, noting that not everyone agrees with his view.

Dershowitz then began wagging his finger in Hostin’s face, telling her:

“Well, I have a question. Would you agree with it — this is going to be a hard question for you.”

The look on Hostin’s face went from amusement to anger in a second and she reminded Dershowitz:

“I thought I asked the questions here, professor.”

Hostin then dared the professor to try and defend Attorney General William Barr’s deeply flawed reasoning for not charging President Donald Trump with obstruction of justice:

That led Dershowitz to claim that Mueller got his conclusions about obstruction wrong, adding:

“Mueller says you can obstruct justice even if you engage in constitutionally protected conduct. Barr doesn’t believe that. From Barr’s point of view the whole Mueller report is based on a false legal premise. It would have been much better if he wouldn’t have said a word until he read the report and every American read the report.”

In reply, Hostin noted that Congress, not the attorney general, should make that determination, as it clearly says in the Constitution. She said she completely disagreed with Dershowitz.

Near the end of the discussion, Dershowitz even tried to compare former FBI Director James Comey’s decision not to charge Hillary Clinton in the email investigation to Barr’s decision on Trump.

Hostin was having none of, it telling her guest that his argument was patently absurd, and shutting him down with this bit of perfect logic:

“There’s a DOJ policy, professor, that says you cannot indict a sitting president. Perhaps that’s why.”

As other legal experts have already explained, the only reason Trump wasn’t indicted was because of that Justice Department policy on indicting a sitting president. Had it not been for that, Trump would already be on trial and facing decades behind bars.