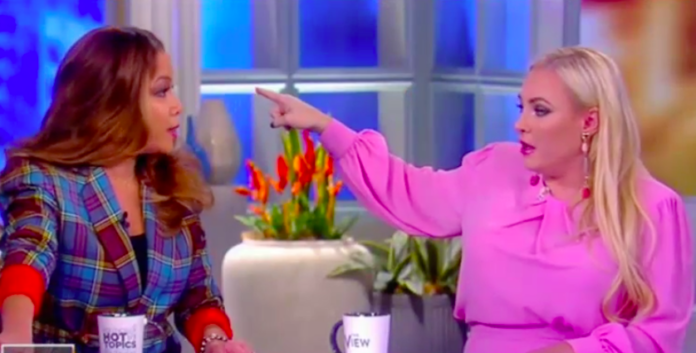 The ladies of “The View” threw down on Thursday over CNN reporter Jim Acosta being banned from the White House by President Donald Trump this week.

During a news conference, Trump threw a tantrum when Acosta asked him questions about his hateful “caravan” remarks about migrants fleeing from Central America, berating the veteran journalist as if he did something despicable.

Acosta attempted to ask a second question as Trump attempted to ignore him, which is when a female White House intern moved in to unsuccessfully grab the microphone out of Acosta’s hands. Trump then proceeded to attack him again.

White House Press Secretary Sarah Huckabee Sanders would later announce that Acosta has been banned from the White House and has been stripped of his press pass, excusing the decision by claiming that Acosta “inappropriately touched” the female intern.

When the topic arose on “The View,” conservative co-hosts Abby Huntsman and Meghan McCain believed the smear.

“I don’t like it when men touch me, in general, without asking for permission,” McCain said. “If I were handing that and some man went like this, I wouldn’t like it. Is it assault? I don’t think it goes to the level of assault. Is it inappropriate — 100 percent.”

But the video clearly shows the intern as the aggressor while Acosta kept his arms and hands static, as host Joy Behar would point out. It looks like the intern came up from under Acosta’s arm and bumped it into her own shoulder as she aggressively attempted to take away his microphone.

That’s not sexual assault, nor is it inappropriate touching on Acosta’s part. It really appears that Trump and the White House made up this false accusation against Acosta.

In fact, former federal prosecutor Sunny Hostin chimed in by informing the conservative duo that the intern could be charged with battery.

“For me, when I saw that, I mean, I learned very early on that what I saw was battery — not by Jim Acosta, but by the young White House aide,” she explained. “When you are holding something, if I may, if you’re holding something and you snatch this from me, this cup is now an extension of me, and that means you’ve battered me, you’ve assaulted me.”

Of course, Huntsman and McCain flew into an uproar, accusing Hostin of victim-blaming and accusing Acosta of grandstanding when he was simply asking a question. The problem is that the intern isn’t a victim and the definition of the law makes that plain. And Trump’s the one who made Acosta the story instead of just simply answering the question or not calling on him in the first place.

In the end, it took Whoopi Goldberg to put an end to McCain’s whining, which is shown in the video below.