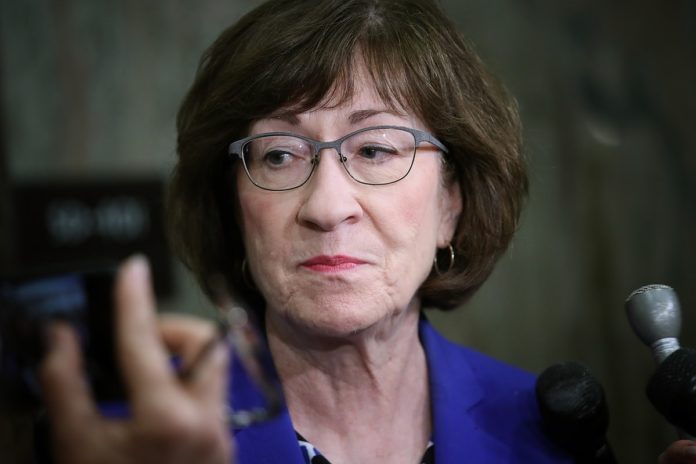 Senator Susan Collins (R-ME) was just handed a dubious honor: She was named “America’s most vulnerable Senator” in 2020, and a look at recent polling shows why she could well be on the way to losing by a dramatic margin in next year’s election.

Morning Consult reports that Collins has seen her net approval rating drop by 16 points, the single biggest decline of anyone in the U.S. Senate:

Collins’ net approval — the share of voters who approve of her job performance minus the share who disapprove — has fallen by 44 percentage points since the first quarter of 2017, when Trump took office. Forty-five percent of Mainers approve of Collins and 48 percent disapprove in the latest rankings, down 16 net points since quarter one of this year, as her campaign gears up in earnest to face a Democratic challenge from state House Speaker Sara Gideon.

The drop in polling numbers for Collins seems to be directly tied to the controversial decision she made in October of last year to vote for the confirmation of Supreme Court nominee Brett Kavanaugh. She said at the time that she was voting for Kavanaugh, who had been accused of sexual assault, out of sense of fairness:

Collins isn’t the only incumbent Republican Senator facing a tough reelection fight, and it now appears that the unpopularity of President Donald Trump could cost the GOP control of the Senate, even if he manages to win a second term in office:

Republicans face a tough map as they work to maintain their Senate majority next year, with their most vulnerable members facing two main problems: Some have seen their popularity fall significantly since President Donald Trump entered office, and for those who haven’t, negative views of his job performance could be a drag on their own paths to re-election.

But Collins appears to be the most endangered of the group, and that one confirmation vote may wind up being what sinks her.