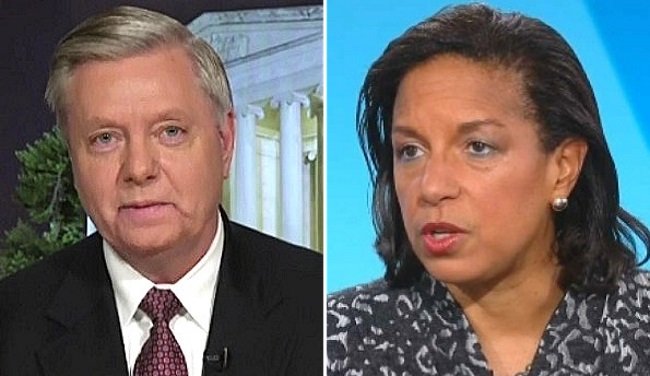 Susan Rice, who served as national security adviser in the Obama administration, made it clear on Wednesday that she isn’t a fan of Senator Lindsey Graham (R-SC), who has repeatedly criticized Rice for the deadly attack on a U.S. compound in Benghazi, Libya, in 2012.

Rice has just written a new book and was a guest on “Pod Save the World,” where she was asked about the impeachment inquiry and his willingness to allow Turkey to invade portions of Syria and drive the Kurds from the region. That led former Obama adviser Ben Rhodes to mention Benghazi as a way of providing context to Trump’s foreign policy:

Tommy Vietor, who also served in the Obama administration, added:

“He’s a piece of shit.” — @AmbassadorRice on Lindsey Graham

Hear the rest of her interview on tomorrow’s #PodSaveTheWorld pic.twitter.com/9GQITwlSlg

Rice has been critical of Trump’s approach to foreign policy, warning earlier this month that the United States would have “blood” on its hands for withdrawing U.S. troops from Syria and turning out back on our Kurdish allies, who have been essential in helping us drive the terrorist group ISIS from the region. She told CNN:

“I mean, the Kurds were the pointy end of the spear who fought ISIS on our behalf. They bled and died because they believed in the partnership they had established with the United States, and we just threw them under the bus in 24 hours. It’s appalling. It’s disgraceful.”

The former national security adviser also noted that Fox News loves to turn people they disagree with into villains so their viewers have someone to direct their anger at:

“You always need fresh villains. Now, on Fox, many years later they just need to say my name and it’s like people start twitching. It’s like an automatic trigger point.

“Trump is the master of it. He makes people angry every day.”

A few days ago, Trump attacked Rice via Twitter:

Susan Rice, who was a disaster to President Obama as National Security Advisor, is now telling us her opinion on what to do in Syria. Remember RED LINE IN THE SAND? That was Obama. Millions killed! No thanks Susan, you were a disaster.

The real disaster, however, is that Trump has now handed Syria over to Turkey and Russia, both of whom are willing to slaughter anyone who gets in their way.