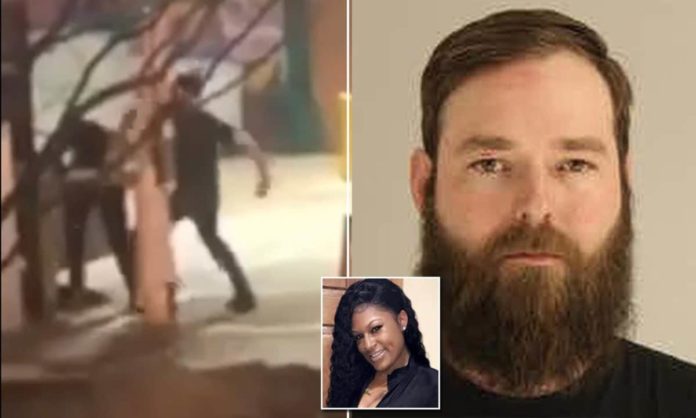 A suspected white supremacist pulled a gun on a black woman and then viciously beat her because she was blocking a parking lot exit.

The incident, which took place in Dallas, has sparked nationwide outrage and cost the accused, 30-year-old Austin Shuffield, his job.

According to Ebony, the altercation took place Thursday evening:

“A 24-year-old woman was driving the wrong way down a street and stopped her vehicle. The woman claims Shuffield approached her car and asked her to move because she was blocking a parking lot exit.

“A physical altercation began after Shuffield approached the woman’s car to take a picture of her license plates. The woman attempted to call 911 when Shuffield allegedly slapped the phone out of her hand, the report said.”

In the video, you can clearly see Shuffield pull what appears to be a semiautomatic pistol and then begin beating the the defenseless woman:

Lee Merritt, a civil rights attorney hired by the unidentified woman who was beaten by Shuffield, says she thinks the assailant should face hate crime charges:

“Our office is speaking with the Dallas Police Department and the Dallas County District Attorney’s office to ensure all appropriate charges are pursued including felony assault, firearm and hate crime related charges.”

Shuffield was employed at the High and Tight Barbershop as a bartender, but has been fired since video of the assault went viral. His employer commented on Facebook:

“We have finally [spoken] with police representatives and have terminated this employee. We do not stand behind the actions that took place and hope that the full weight of the law comes down on this incident.”

Initially, Shuffield tried to assert that he was acting in self-defense, saying the woman hit him, threatened to pepper spray him, and said she would break the back windshield of his pickup truck. However, the video doesn’t support any of those allegations.

Dallas authorities say the woman who was beaten is recovering from post-concussion syndrome and cranial swelling.