The United States Blues
Home National News Swalwell Warns Trump: We Are About To ‘Take An MRI’ To Your... 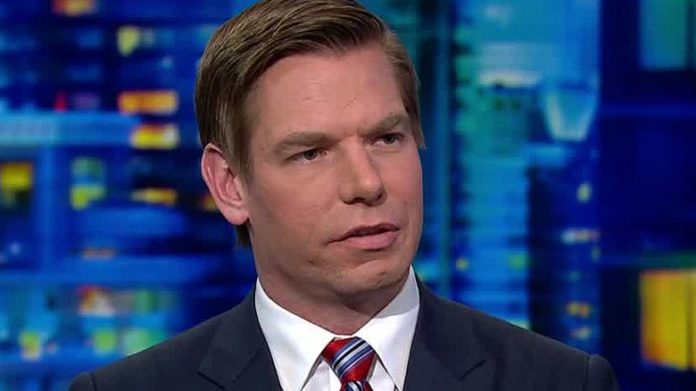 Rep. Eric Swalwell (D-CA) has a message for President Donald Trump: You’re about to see what Congressional oversight is like, and you’re probably not going to like it.

Trump is said to be nervous over what Congressional Democrats have planned in the way of hearings and subpoenas when they take control of the House in January, NBC News reports:

“Trump’s fear about the possibility has escalated as the consequences of federal investigations involving his associates and Democratic control of the House sink in, the sources said, and his allies believe maintaining the support of establishment Republicans he bucked to win election is now critical to saving his presidency.”

In an interview with Salon, Swalwell made it clear that he and his party will provide a long overdue check on Trump:

“We’re going to conduct the oversight role that we are responsible for, especially where Republicans gave Donald Trump presidential immunity for two years. This guy has had two years of just free passes where he has not been reined in, and so, you’re essentially… it’s like essentially being responsible for a child for two years who’s had no rules and no accountability. It’s going to be a wake-up call for the President. I think he saw that in real time…when he met with Leader Pelosi and Leader Schumer. We’ll investigate where the Republicans didn’t, and that means filling in the gaps with the Russian investigation, that means seeing his taxes to see if his financial interests are driving foreign and domestic policy. That means looking at how people are cashing in on access that he gives them… how he’s cashing in on access that he gives people to the White House.”

And Swalwell elaborated on what House Democrats have planned for the president:

“We’re going take an MRI to his finances.”

Asked about comments Trump made immediately after the midterm elections in which he said he was willing to collaborate with Democrats but would refuse to do so and go to war with them if they dare to investigate him, Swalwell replied:

“We’re going to do both, and he doesn’t get to set the terms. The American people do, and they overwhelmingly sent a large majority to Congress. Leadership is working in a divided government trying to help the people who are counting on you and responding to lawful subpoenas that are sent over. We’re not going to be threatened or committed into not doing our job. The people who gave us the majority wouldn’t want us to do that anyway.”

Swalwell’s comments come on the heels of remarks made by incoming House Speaker Nancy Pelosi, who said Thursday:

“There is popular demand for the Congress to request the president’s tax returns.

“I’m sure the White House will resist and so the question is where do we go from there?”

Clearly, Donald Trump and his business dealings are about to be placed under a microscope. That’s almost certain to enrage him.