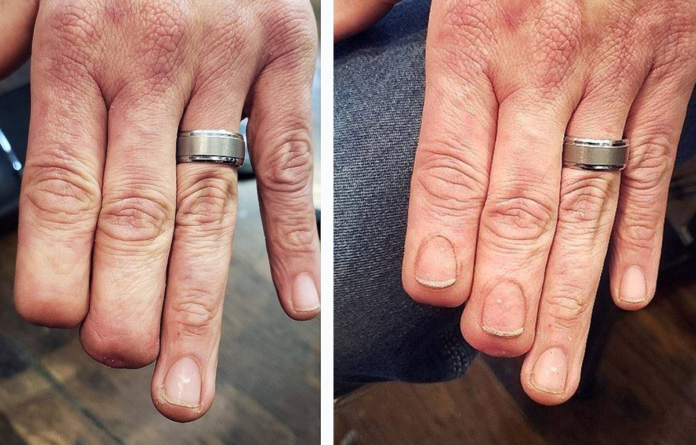 A tattoo artist from Hecker, Illinois seems to be revolutionizing the tattoo industry and social media in the process. When most people think of a tattoo, they would never picture something like a realistic trompe l’oeil fingernail, so when he posted his first-of-a-kind tattoos of just that, it got thousands of peoples’ attention.

You may have seen the picture below on Facebook. It is the work of tattoo artist Eric Catalano. The before picture is on the left, and on the right, you see he has almost magically created “fingernails” for a man who lost the ends of two of his fingers.

It’s so realistic, you would probably never know.

As skilled as he is today, Catalano had no idea that this is what he would be doing. He just wanted to find some way to help his community.

“When I started tattooing in the first place it was just – be a rock star and ride motorcycles and party. Kind of got over that whole part and grew up, the more I wanted to use tattooing to give back somehow,” said Catalano.

Then Eric’s grandmother was diagnosed with cancer, and he decided to use his creative skills for an awareness campaign.

“…and I was like, you know what? I’m going to start doing these nipples. I’m going to learn how to do these ultra-realistic nipples and then I’m going to give those away for free.”

Catalano decided to start using tattoos to help people who have had a mastectomy with nipple and reconstruction services. He uses 3D tattoo techniques as well as advanced ink blending techniques to create realistic-looking areolas and nipples. Unfortunately, and as you probably expect, people have reported the images of his work on social media, mistaking what he is doing for gratuitous nudity because he is so good at what he does.

When Catalano completed one of his first projects for a client, he decided he couldn’t bring himself to charge anything. Demand for his “micro dermal nipple reconstruction” services has drawn hundreds of people to Eternal Ink Studio.

According to his Facebook page, he and his partner have big aspirations.

Catalano and his partner Matt are “developing a life-changing prosthetic that will revolutionize the future of nipple/areola reconstruction globally.”

In an interview with LADbible, Catalano explained how he was taking his work to the next level of realism.

“The awareness raising ‘trend’ was just not enough. So, I got to work on parenting and inventing a micro dermal implant that sits under the skin and has a silicone areola and nipple magnetized to the top as a way to give women a tangible nipple instead of just raising awareness.”

One of his clients is Darlene Rhodes, a middle-aged woman who was diagnosed with cancer. She was full of excitement about getting a tattoo. (see video below)

“Oh, the whole journey coming to today has been amazing,” said Rhodes.

The Farmington resident had never feared or thought about cancer before her diagnosis, but it changed her life. She even wrote a book about her path called “The Miracle of the Breaking,” in which she discusses “rising from an ocean of fear steeped with abuse and disappointment, and taking hold of a new hope and future with God.”

For Rhodes, what Catalano is doing is serving a higher purpose.

“This to me is just such a beautiful gift,” said Rhodes. “Just another favor of God.”

KSDK interviewed the author and cancer survivor as she got a tattoo from Eric Catalano. After a year of treatment, she is cancer-free and ready to start a new chapter of her life with a body that feels like “normal” again.

In addition to his amazing work to help people recover from cancer or feel better in their skin, Catalano is a highly-skilled artist, rendering extremely complex designs with perfection. As top-notch as his creations are, it’s even more remarkable that he is known more and more for helping amputees and cancer survivors.

Eternal Ink has been in business for nine years and is thriving because of Eric Catalano’s higher calling to help others. If you are interested in his services, you can reach out on his website.

See more in the videos below:

His fingernail tattoos for an amputee went viral, but it's just one example of how Eric Catalano has used his art to give back.

Posted by HeartThreads on Sunday, February 17, 2019

See more from KSDK News below: