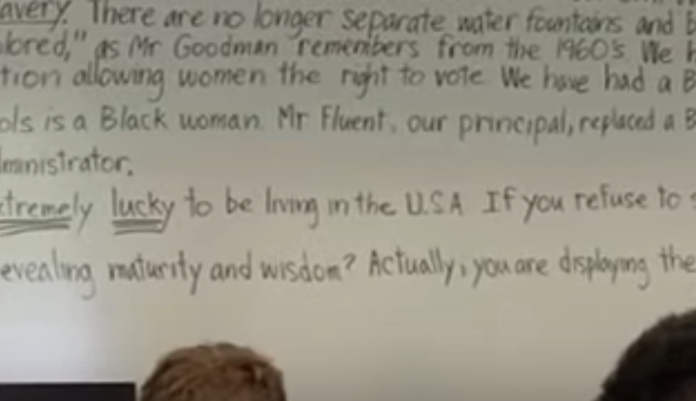 A Florida school district removed a teacher from the classroom this week after he got caught shaming students for not standing during the Pledge of Allegiance, as is their right.

Students walked into Mr. Daniel Goodman’s class at First Coast High School on Thursday, only to be bombarded by a whiteboard message addressed to them arguing that they should feel compelled to stand for the pledge and the national anthem because Americans have died for our country. Goodman’s message particularly targeted blacks and women.

“THINK: We had about a half-million Americans die in our Civil War, which was largely to get rid of slavery,” Goodman wrote. “There are no longer separate water fountains and bathrooms in Jacksonville for ‘white’ and ‘colored,’ as Mr. Goodman remembers from the 1960′s. We had an amendment to the U.S. Constitution allowing women the right to vote. We have had a Black president. The superintendent of Duval Schools is a Black woman. Mr. Fluent, our principal, replaced a Black man, Mr. Simmons, who now is a DC PS administrator.”

“MY POINT?” Goodman asked. “You are all extremely lucky to be living in the U.S.A. If you refuse to stand during the Pledge of Allegiance or our National Anthem (AS SOME PAMPERED ARROGANT CELEBRITIES AND ATHLETES TEND TO DO), are you revealing maturity and wisdom? Actually, you are displaying the opposite. -Mr. G.”

Needless to say, Goodman only displayed his own lack of maturity and wisdom, not to mention knowledge of constitutional rights and Supreme Court rulings.

In West Virginia v. Barnette in 1943, a majority of the high court ruled that students have the right to refuse to stand during the pledge.

[F]reedom to differ is not limited to things that do not matter much. That would be a mere shadow of freedom. The test of its substance is the right to differ as to things that touch the heart of the existing order.

If there is any fixed star in our constitutional constellation, it is that no official, high or petty, can prescribe what shall be orthodox in politics, nationalism, religion, or other matters of opinion, or force citizens to confess by word or act their faith therein. If there are any circumstances which permit an exception, they do not now occur to us.

That applies to the national anthem, during which former NFL quarterback Colin Kaepernick took a knee in protest of police brutality and social injustice. Even an athlete on the United States fencing team recently took a knee during the anthem after winning the gold medal at the Pan American Games.

It’s not disrespectful to the flag or the troops, especially since the troops fought and died for us to have the freedom to stand or not.

Children across the nation have made the same choice to not stand, and they have every right to make that choice for any reason. Trying to force students to stand by shaming them sets a terrible example and the district did the right thing by pulling Goodman from the class before he could do more damage to the minds he had been charged to develop. We need dissenters in our nation. Not blind obedience.