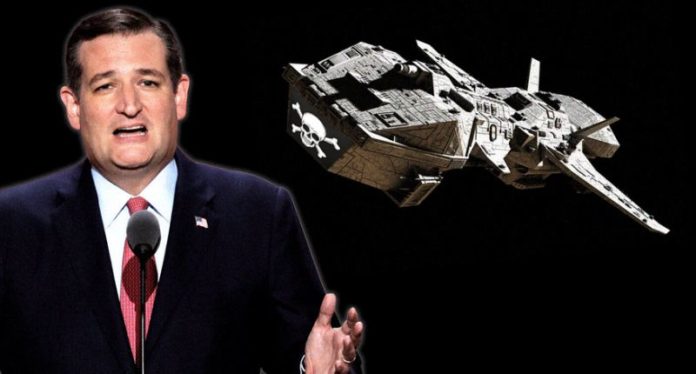 Granted, Senator Ted Cruz (R-TX) has said and done some incredibly asinine things over the years, but something that came out of his mouth this week proves that Republicans in the Age of Trump will say anything to curry favor with the Dear Leader.

During a hearing of the Senate subcommittee on Aviation and Space, Cruz endorsed Trump’s idea of a so-called “space force” that would be a new military force devoted to battle in space. The Texas senator remarked:

“Since the ancient Greeks first put to sea, nations have recognized the necessity of naval forces and maintaining a superior capability to protect waterborne travel and commerce from bad actors.”

So far so good. But in the next breath, Cruz fully jumped the proverbial shark, adding:

“Pirates threaten the open seas, and the same is possible in space. In this same way, I believe we too must now recognize the necessity of a Space Force to defend the nation and to protect space commerce and civil space exploration.”

Space pirates. Yeah, he really said that, even though the evidence of a genuine need for a space force is non-existent outside of a Star Wars movie or reruns of “Battlestar Galactica.”

As you might expect, mockery of Cruz on social media was immediate:

By that logic we should also fund the space post office. #spacemail

Aww, bless his heart, space pirates are invading his brain.

Incredible the amount of forward planning for a distant threat like space pirates – meanwhile no action on the imminent and much greater threat of climate change.

Clearly the proper response to a space pirate threat is to deploy the space ninjas.