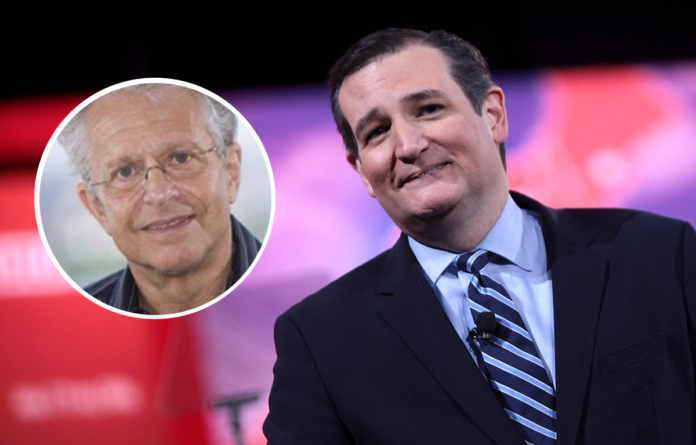 Oh, snap! It looks like one of America’s most universally-disliked smarmy senators might have been called out for colluding with the Russians. Not it’s not the usual suspects, Rand Paul, or Lindsey, or McTurtle. This time, it’s none other than Senator Ted Cruz of Texas, or “Lucifer in the flesh,” as former Speaker John Boehner referred to him.

Here is the well-respected Harvard law professor, Laurence Tribe, chiming in on Twitter, where Cruz is being accused of colluding with a specific Russian to sway our elections. Tribe directly asked for Cruz’s response to the serious issue.

Memo to @TedCruz: As your former HLS constitutional law professor, and a US citizen as well, I trust you’ll copy me on your reply to @jennycohn1. I’m genuinely curious. — Larry Tribe https://t.co/mXd02Df94M

For some background, here is Tribe talking about Cruz as a student.

Now, diving into the Tribe Tweet, he references the accusation by Jennifer Cohn, attorney, and election integrity advocate & writer.

“As a US citizen, I demand to know why your campaign gave US voter data to a guy in Russia named Yaroslav Leontenko.”

Dear @TedCruz: As a US citizen, I demand to know why your campaign gave US voter data to a guy in Russia named Yaroslav Leontenko.

I encourage all of my followers & everyone who else who sees this post to do the same. I look forward to ur response. cc: @BetoORourke @VickerySec https://t.co/iOkWvPTUCp

She is making some serious allegations against Cruz, citing another Tweet, from Chris Vickery, a native Texan, and director of cybersecurity at Upguard. He is a data breach expert who testified before Parliament in the UK and in Canada about data sharing and misuse around Facebook, Cambridge Analytica, and other connected companies.

“Your campaign gave US voter data to a guy in Russia named Yaroslav Leontenko. He wrote code directly into your official campaign app. His work also included translating that app framework text into the Russian language for use in other campaigns.
Explain yourself.”

.@tedcruz Your campaign gave US voter data to a guy in Russia named Yaroslav Leontenko. He wrote code directly into your official campaign app. His work also included translating that app framework text into the Russian language for use in other campaigns.
Explain yourself. pic.twitter.com/WKdgvaSi50

Cohn goes on to clarify that Vickery “testified to Parliament about Brexit and Cambridge Analytica/SCL and who also have discovered at least 3 massive voter data leaks since 2015.”

Reports indicate that Senator Cruz deployed a smartphone app created by Aggregate IQ through his re-election campaign’s final hours. The software team from that small Canadian data firm was at the heart of the Cambridge Analytica controversy. You will remember that Cambridge Analytica harvested millions of Facebook users’ data without them knowing it.

Facebook suspended AggregateIQ over its own possible improper access to the data of millions of Facebook users. Now Vickery is saying that the apps development notes indicate that the Russian, Leontenko, wrote code for Ted Cruz’s phone app, which he used to target voters in Texas.

To be clear, Vickery has been attempting to get Cruz to answer about his assertion since November 2018, and today he has yet to get an answer. Will Tribe’s involvement prompt a response?

In addition to the assertion that Cruz’s phone app was connected to a shadowy Russian figure, past reports indicate connections to Cambridge Analytica, the Mercers, Steve Bannon, the Trump campaign, as well as electoral impropriety in the UK during Brexit campaign.

Was it all essentially one big corrupt entity?

“Concerns have been raised about the closeness of the two organizations including suggestions that AIQ [AggregateIQ], [SCL Elections, and Cambridge Analytica] were, in effect, one and the same entity,” stated a recent report by the U.K.’s Information Commissioner’s Office.

If the allegations are true, then the smarmy senator from Texas has some ‘splaining to do about his connections to a Russian and use of data during his reelection campaign in Texas. We doubt we hear a peep out of him until he has no other choice but to answer. Did Cruz collude? Did Trump? Did Cruz collude with Trump? Of course, that leads to the sickening question: How much of the GOP is traitorous and compromised in 2019?

As far as America is concerned, maybe Senator Lindsey Graham summed it up best:

“Donald is like being shot in the head. You might find an antidote to poisoning, I don’t know, but maybe there’s time,” said Senator Graham.

Graham went on to say this while on The Daily Show in 2016, you know, before he lost his mind and his way completely:

“If Donald Trump carries the banner of my party,” Graham said, “I think it taints conservatism for generations to come. I think his campaign is opportunistic, race-baiting, religious bigotry, xenophobia. Other than that, he’d be a good nominee.”

Maybe America has time to stop the rampant poisoning and slow death of our democracy thanks to men who seem intent to do just about anything to stay in power, (including colluding with Russians) and the men who enable them completely today – like Graham.