The United States Blues
Home News Teenager accused of threatening to shoot up school to prove how great... 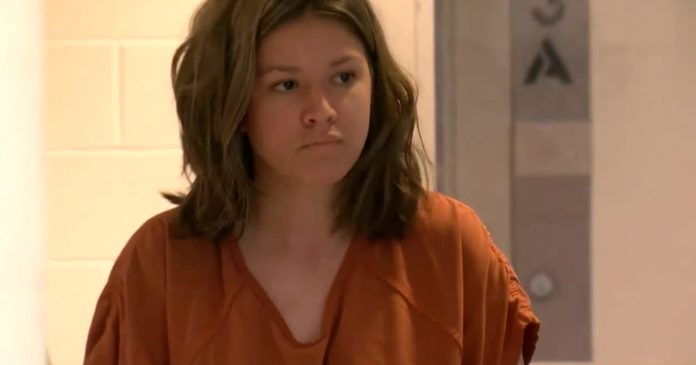 18-year-old Alexis Wilson was working at a pizza restaurant in McAlester, Oklahoma, when she allegedly began bragging about a new gun she had recently acquired.

As it turned out, the gun was an AK-47, and Wilson reportedly showed a co-worker a video of her firing off a few rounds from the assault rifle. Then, police allege, she told her co-worker that she was planning to use the gun to “shoot 400 people for fun” at the high school she had been suspended from for bringing a knife to class and placing swastikas on her personal belongings, the Washington Post reports:

On Monday, the Pittsburg County Sheriff’s Office said Wilson was charged with a felony for making a terrorist threat against McAlester High School.

“In today’s times, you can’t say stuff like that,” Pittsburg County Sheriff Chris Morris told KTUL. “We’re going to take it serious and investigate it to the fullest extent and make an arrest if possible because we do not want any of our schools getting shot up — nobody does.”

Mass shootings are almost exclusively the actions of males, so Wilson is a bit of an anomaly, but police said they take her threats very seriously, with Sheriff Morris commenting:

“A female can pull the trigger just as easily as a male. It’s rare, it’s different. I don’t know that there’s been a female accused of this.”

After being taken into custody, Wilson reportedly told authorities that she made the threat in order to convince her co-worker that “not everyone that owns a gun is a bad person.”

During her interview with police, Wilson also said she had been bullied while a student at the high school:

Wilson told the officers that she used to feel “suicidal and borderline homicidal” toward her classmates at McAlester High because of the bullying she faced. Jordan asked her if she thought about hurting anyone at the school.

“Not recently, but she has in the past,” the report says.