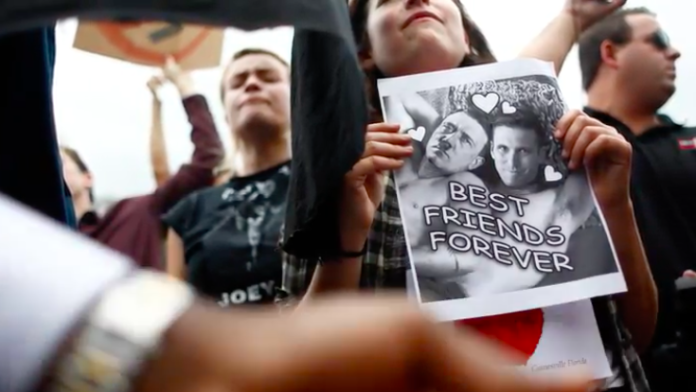 Teespring, a Silicon Valley startup that sells T-shirts online caused a furor after selling shirts that appear to honor convicted murderer Dylann Roof. The company pulled the shirts from its website Tuesday and is now in damage control mode.

The company, backed by billions of dollars in venture capital sold T-shirts and sweatshirts that said, among other things, “Keep Calm and Roof On,” featuring Roof’s bowl-cut hairstyle. The caption on the ad read:

“Raising The Roof: Bowl everyone over with your impeccable style that will have them all begging to be taken to church!”

Sweatshirts sold by the company featured images of Roof:

The “Keep Calm” phrase is certainly a popular meme, but it’s origins stem from a motivational poster used by the British government during World War II, Newsweek reports.

And this isn’t the first time that Teespring has run afoul of what should be considered human decency and respect. In May 2017, the company featured T-shirts that said “Black Women Are Trash,” as well as other T-shirts with racist slurs.

As if that weren’t bad enough, the company also caused a furor after selling T-shirts featuring swastikas last year and offered shirts that said “Rope. Tree. Journalist. Some assembly required.” via Walmart.

Teespring said it receives more than 100,000 designs submitted daily and it relies on technology to screen the images “specifically to ensure that this type of content is not published on our site.”

But since the Dylann Roof clothing happened, obviously, the “technology” was asleep on the job. Maybe a pair or two of human eyes should be used every now and then?

Teespring does not tolerate any glorification of harm or hate towards others. We are actively removing these campaigns and banning the sellers who launched them. We sincerely apologize for any inconvenience or hurt this may have caused.

Roof’s bowl-cut hairstyle is beloved among the alt-right, and Roof himself was a fan of The Daily Stormer, a favorite magazine of Neo-Nazis. Christopher Cantwell, who runs a podcast and was one of the white supremacists demonstrating at Charlottesville last August, likes to create memes with Roof’s hairstyle on his head and has posted them on the social media website Gab, a favorite of extremists everywhere.

It’s for reasons like this that when popular websites like Teespring, offer racist or misogynistic designs mistakenly or otherwise, it’s still highly offensive. And they should be called out on it at every opportunity. Obviously, these sites need to rely on more than just technology to keep these nasty affronts from occurring.

People shouldn’t have to suffer a dose of racism with their morning coffee. So by all means, Teespring, step up and open your human eyes.