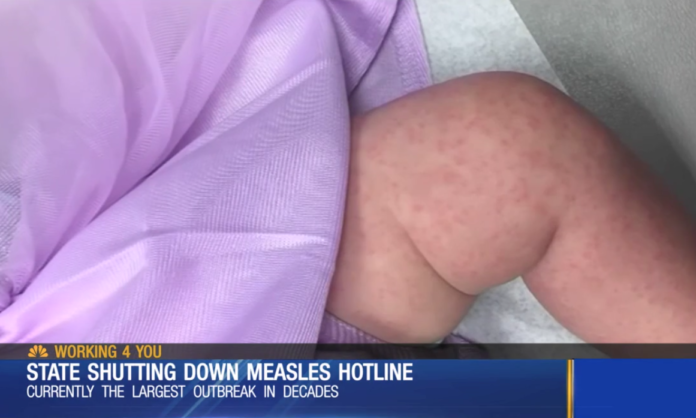 As hundreds of people across the United States continue to be counted among those who have contracted the measles virus because of the anti-vaxxer movement, concerned parents in Tennessee can no longer call a measles hotline to ask important questions.

Despite receiving more than 400 calls in six weeks concerning the measles, the Tennessee Department of Health shut the hotline down.

Tennessee’s government is dominated by Republicans, many of whom are allies of the anti-vaxxer and anti-science movement.

People have been calling in to ask questions ever since a major outbreak of measles occurred in at least 22 states, particularly New York, which is home to over 600 cases alone.

Overall, the Centers for Disease Control has documented 704 cases, blowing past the previous high of 667 in 2014.

The Tennessee Department of Health is telling people to refer measles questions to their doctors, but many parents believe the hotline is a vital tool for information because it is far more accessible.

“I think that kind of hotline is important not only to tell you about the disease itself but also what the city and state are actually doing for you as a parent to keep children protected,” Frank Santora, a parent of two children, told News 4. “If you’re sending your kids to kids that don’t have that vaccination or if they’re around the playground there’s a chance you could get that exposure unknowingly and that’s really scary.”

Indeed, many children have not been vaccinated because anti-vaxxers wrongly believe vaccinations are dangerous. The fact is, however, that the MMR vaccine is perfectly safe and has saved millions of lives around the world.

The Tennessee Department of Health has a public responsibility to keep the hotline connected. Disconnecting it puts the public health and safety of citizens at risk. Measles is a highly contagious virus that can stay alive for hours after an infected person has left a room. It has been deadly in the past and it is still deadly now and can cause other serious complications. As herd immunity in the United States faces collapse, we can expect to see deaths that could have been prevented simply by getting vaccinated.

It’s never been more important for parents to do the right thing for themselves and their children. Visit your doctor and get vaccinated as soon as possible. Lives literally depend on it.