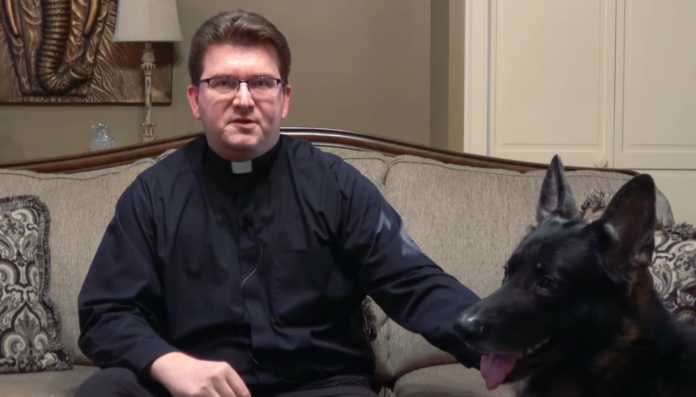 A Catholic priest in Collierville, Tennessee, is facing criticism for his decision to ban an African-American housekeeper from his church-provided home, and now he’s trying to blame it all on his dog.

“I was just supposed to clean the church and I was supposed to go to the pastor’s house and clean as well.”

When she arrived at the house, Allen recalled, she was quickly turned away and not allowed to enter:

“(She) was introduced to church staff at Catholic Church of the Incarnation in Collierville by the woman she was replacing. That’s when she got the news.

“They were just like, ‘Well, I’m not really sure how to say this,’ kind of like in a joking way,” she said. “‘But Father Jacek doesn’t want black people cleaning the house because his dog is racist.'”

“She said she never had any interaction with Father Jacek Kowal.”

A letter has been sent to the diocese by Allen’s attorney. It reads in part:

“wo church office employees then reiterated that Father Jacek ‘did not want (Ms. Allen) there’ and that they needed to leave. Both Ms. Allen and Ms. Weaver were shocked, humiliated, and felt severely disrespected by this treatment and the statements.”

Though he refused to appear on camera to refute the charges, Jacek did issue a statement:

“I wholeheartedly believe all forms of discrimination… are sinful and wrong.”

Jacek added that his dog, a German Shepherd, once had a “bad experience with a stranger who happened to be African American.”

But that is no excuse, Allen remarked, noting that she gets along well with dogs and that wants the priest to step down from his post:

“I’m used to being around dogs. I’m not scared of dogs. Dogs love me.

“I really feel like they need to know it’s not right. It’s not ok for them to do that to people of color.”

Allen’s attorney, Maureen Holland, said her client may take the matter to court if the diocese doesn’t handle the matter appropriately.

Here’s more on the story from Fox 13: