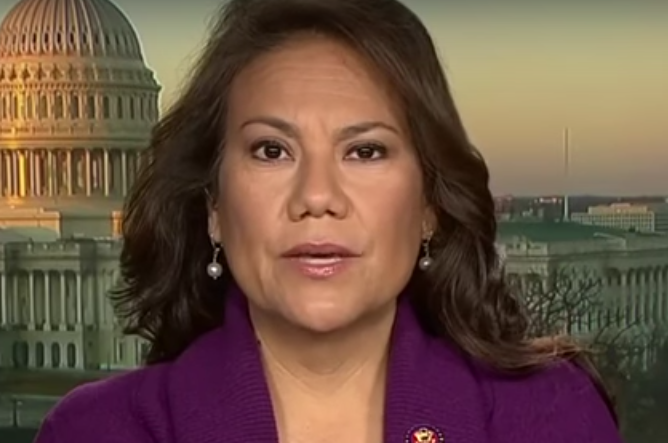 President Donald Trump’s visit to the southern border on Thursday did not impress Rep. Veronica Escobar (D-Texas), who ridiculed Trump for being too frightened of Fox News to end his shutdown.

Escobar’s district lies on the border with Mexico, and while some of her district has fencing and steel slat walls on the border, it serves as an ugly symbol of division more than it helps prevent migrants from crossing.

For three weeks now, Trump has kept the government shut down over his demand for $5.7 billion to build his vanity project, and he continued to argue for his wall by visiting the southern border for a photo-op on Thursday.

Escobar told CNN host John Berman that Trump’s trip went exactly as she expected. He came and “took a look at only what he wanted to take a look at and talked only to people he wanted to talk to, folks who would agree with him.”

Indeed, if Trump had talked to many of the landowners in the borderlands, he would find that most of them don’t want a wall and are prepared to sue the federal government to prevent Trump from seizing their lands.

Escobar went on to argue that the government shutdown is not about Trump’s wall, it’s about his fear of angering his supporters and Fox News, and she called Trump out for it.

“I think we have to remember why the government is shut down today,” she said. “It really is not because of a wall. The reason that there’s a government shutdown today, and I feel like we’re taking our focus off of this, is because the president is afraid of Fox News. There was a deal to reopen the government.”

That’s true. Senate Republicans and Democrats passed a bipartisan bill to fund the government through February in December, but Trump rejected it despite signaling that he would sign it. It’s just like when he rejected a bill that included $25 billion for his wall back in the summer before he rejected that because the deal compromised by protecting DACA, which Fox News and Trump’s supporters pitched a fit about. And Fox hosts like Jeanine Pirro have been urging Trump to continue the shutdown.

Escobar then warned that Democrats must stand firm because giving Trump his way will only incentivize him to shut the government down over and over again whenever he doesn’t get his way. And holding America hostage should not be a negotiation tactic.

“If we give in, if we capitulate on this, then that’s sending a signal to the president that any time he wants to dig in his heels about absolutely anything, all he has to do is try to shut down the government,” she concluded. “This is in many ways much bigger than the conversation about a wall. This is about how we govern.”

This is a shutdown designed to appease Trump’s base, and that makes him a threat to the country as thousands of federal workers continue to remain unpaid, especially TSA agents, air traffic controllers, and border patrol, all of whom may be forced to find different jobs the longer the shutdown drags on. That compromises the security of the nation over a wall that will be useless to stop drugs and illegal immigration.