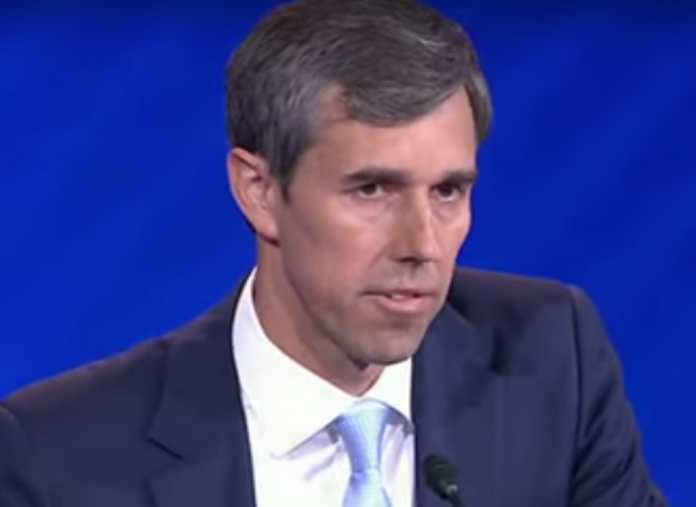 Former Rep. Beto O’Rourke (D-Texas) received what appeared to be a death threat from Texas GOP state Rep. Briscoe Cain on Thursday night in response to Beto’s remarks about assault weapons during the Democratic debate.

Beto has been a strong voice against gun violence, especially since two mass shootings in his home state have occurred in just last month, one in El Paso that claimed 22 lives and another in Odessa that claimed five lives.

In response to the shootings, Beto has criticized Republican inaction and President Donald Trump for inciting violence.

But he also supports an assault weapons ban similar to the previous Federal Assault Weapons Ban of 1994 that expired in 2004. Ever since then, mass shootings have skyrocketed.

Asked whether he would take assault weapons away from gun owners through a buy-back program, Beto declared that he would as the audience cheered.

“If it’s a weapon that was designed to kill people on a battlefield,” O’Rourke said. “If the high impact, high velocity round, when it hits your body, shreds everything inside of your body because it was designed to do that so you would bleed to death on a battlefield and not be able to get up and kill one of our soldiers. When we see that being used against children and in Odessa, I met the mother of a 15-year-old girl who was shot by an AR-15 and that mother watched her bleed to death over the course of an hour because so many other people were shot by that AR-15 in Odessa, there weren’t enough ambulances to get to them in time. Hell, yes, we’re going to take your AR-15, your AK-47. We’re not going to allow it to be used against a fellow American anymore.”

Again, the audience in attendance resoundingly approved of what Beto had said. But a Texas Republican lawmaker didn’t feel the same way. Rather than simply voice disagreement, Briscoe Cain dared O’Rourke to come take his gun, which Twitter soon deleted because it violated community standards.

Beto noticed and responded by including a screenshot of Cain’s post, and pointed out that it demonstrates Cain is one person who certainly should not have an assault weapon.

This is a death threat, Representative. Clearly, you shouldn’t own an AR-15—and neither should anyone else. pic.twitter.com/jsiZmwjMDs

America has already been dealing with hundreds of mass shootings every year. And the shooter in El Paso was incited to violence by Trump’s rhetoric. Now Cain is spouting rhetoric that puts Beto’s life in serious jeopardy. This is why we need gun control laws and this is why we need laws against domestic terrorism and these kinds of threats. Because if some conservative nut job takes a shot at O’Rourke because of what Cain wrote, Cain should be held responsible.