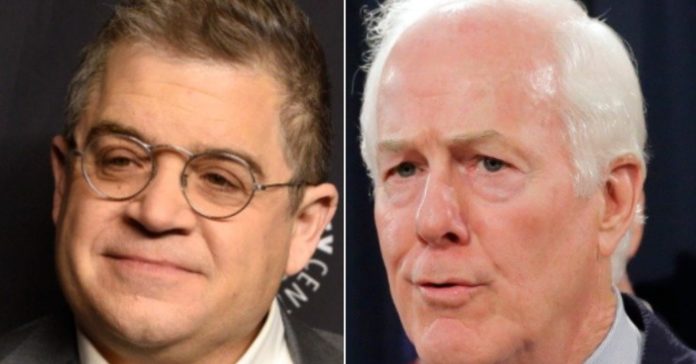 Senator John Cornyn (R-TX) is facing a tough 2020 re-election battle in the Lone Star state, and apparently his campaign got upset when comedian Patton Oswalt after Oswalt appeared in a campaign video for Cornyn’s Democratic opponent, MJ Hegar.

“The ‘Team Cornyn’ Twitter account ― run by campaign staff and not the senator himself ― responded by slamming the 2020 rival as ‘Hollywood Hegar’ and retweeting ‘offensive comments in old tweets by Oswalt, censoring both profane words and even non-profanities, such as “penis.”

“It even attempted to saddle Oswalt with a nickname: ‘Vulgar Patton.'”

That was all it took for Oswalt to begin retweeting the slams against him and respond with his own barbs aimed at Cornyn and his campaign. Take a look:

Oh my God. Lemme put a nickel in the swear jar and then you can tell me about your crush on Theda Bara, you pointless fossil. https://t.co/iaGaJxCymU

I just noticed: you *****’d the word “penis.” Oh my god you Pepperidge Farm dipshit. Go tell your constituents about the time you babysat Chester A. Arthur, drink your Ensure, and sit down. https://t.co/iaGaJxCymU

Oh my God. HOW did you find an offensive Tweet in my Twitter feed? Next, go into the @McDonalds Twitter feed and see if they mention “hamburgers,” Woodward. https://t.co/4t5JwwH2iv

Do you also bleep out “appendix” and “kidney”? https://t.co/NKjdoUQ84b

Whoa! An Anthony Weiner joke! I love this journey through time you’re taking us on, @TeamCornyn! https://t.co/sVyIW4pbZ2

Then others joined the party and berated Cornyn:

Intern: But the Internet is laughing at you. Patton is not your opponent.

Cornyn: But look at all the likes!

Intern: Sir, those are comments… you’re being ratioed.

This is a fun game! pic.twitter.com/ZTFHwTFk5Z

LOL your buddy just tweeted this over Easter weekend. I can tell you’re very sincere about the pearl-clutching! pic.twitter.com/GDPWkDIVTx

Today I watched one of my senators try to hold a professional comedian to standards that he wouldn’t hold the president to. You guys just keep making this story more and more ridiculous.

If this is any indication of how the 2020 Cornyn campaign is going to perform the rest of the way, the GOP might want to go ahead and concede the seat.