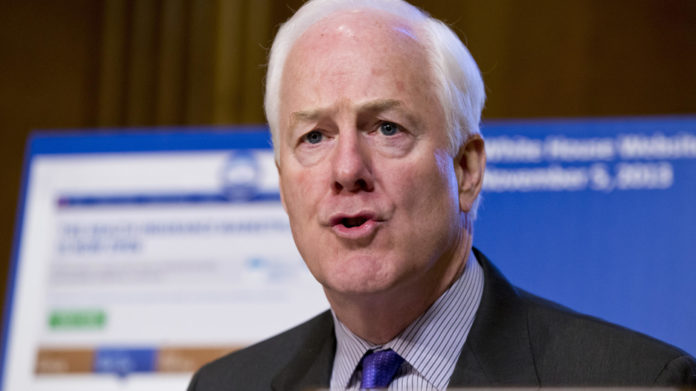 Texas Republican Senator John Cornyn is in very hot water for remarks he made on Twitter regarding wanting his bank to be in the business of providing financial backing for migrant child detention centers.

On Thursday, one major U.S. bank, Bank of America, announced that it will no longer do business with any company that operates immigrant and prisoner detention services, according to CNN:

A spokesperson said Wednesday that Bank of America has discussed the issue with its clients that provide those services. While the bank appreciates “steps they have taken to properly execute their contractual and humanitarian responsibilities,” it ultimately decided to “exit the relationships.”

“Lacking further legal and policy clarity, and in recognition of the concerns of our employees and stakeholders in the communities we serve, it is our intention to exit these relationships,” the spokesperson said.

I may have to change banks: Bank of America will no longer do business with companies that run detention centers – CNN https://t.co/8xG7hlvlOG

Detention centers for immigrant children have come under increased scrutiny recently with multiple reports of children being denied basic needs such as blankets, soap, and toothbrushes. There have also been reports that children as young as seven are taking care of babies because care is not being provided by those running the facilities.

Senator Cornyn’s tweet didn’t sit well with many on social media, and he was quickly called out for his comment:

I guess you will. They are disgusted with you and your kind treating innocent children like animals. The real animals are you fuckers pretending to care about America when all you care about is money in your pocket. You are pathetic!

You are a despicable, horrible person; a typical Republican getting off on children being tortured. You deserve to be damned.

Children are dying in these facilities and this guy is wondering where he can get his next free toaster and complimentary checks.

That’s funny, because I was thinking of changing Senators.

To someone less into concentration camps.

If businesses can refuse same sex couples based on “deeply held belief,” banks should be able to refuse doing business with assholes.

You love cashing in on people’s misery that much, huh? Good for you. Enjoy hell.

This is something a person filled with hate would say. Does it fill you will pleasure to see children literally dying and suffering in cages in your state?