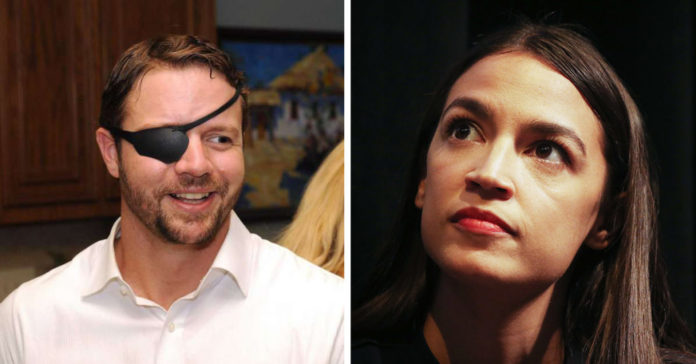 Some have dubbed freshman GOP Rep. Dan Crenshaw (TX) as the antithesis of another first-term member of Congress, Rep. Alexandria Ocasio-Cortez (D-NY), who recently suggested that the wealthiest Americans should have to pay income taxes at a 70 percent marginal rate, which just so happens to be supported by a majority of taxpayers.

Crenshaw was watching the Super Bowl between the New England Patriots and Los Angeles Rams, so he decided he’d try some social media trolling of his Democratic colleague with this tweet:

Should someone propose a 70% tax on the Patriots so that NFL competition is more fair and equal? Asking for a friend.

Bright and early Monday morning, Ocasio-Cortez responded to Crenshaw, she she shredded his argument with just a few words:

The average NFL salary is $2.1 million, so most players would never experience a 70% rate.

The owners who refuse to hire Kaepernick would, though. https://t.co/AnST2lCiU9

Wow! Not only did Ocasio-Cortez manage to prove that Crenshaw doesn’t know the basics of her tax plan, she also got a mention of former San Francisco 49ers quaterback Colin Kaepernick in there.

Others on social media then joined the debate and raked Crenshaw over the proverbial coals:

The NFL has revenue sharing, a salary cap (and team spending floors), and a player entry draft designed to reward the weakest teams. That’s socialism, not capitalism. https://t.co/Hfz0Dt9Lvj

I’m not sure which is worse.

1) You’ve never heard of a salary cap.
2) You think progressive taxes tax all income at the highest rate.
3) Snarkily using “Asking for a friend” about something you actually don’t understand.

The NFL is about as socialist as it gets. Revenue sharing, free agency, salary cap. And every year about 6 teams that didn’t make the playoffs the year before make it.

do you have to work extra hard to get this owned?