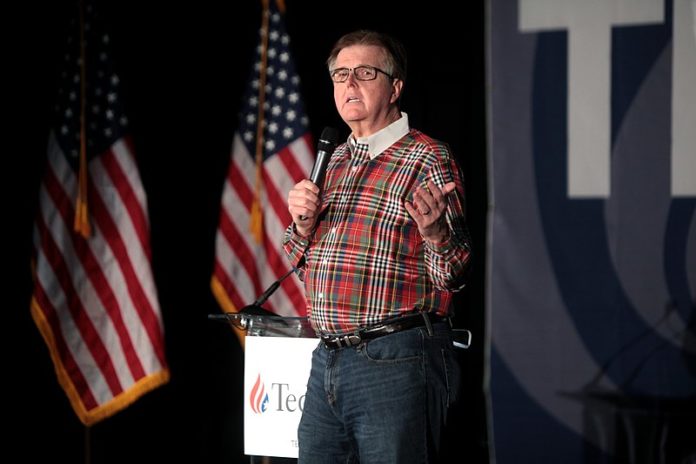 In response to the killing of 20 people in El Paso on Saturday, Texas Lt. Governor Dan Patrick chose to attack anti-fascists rather than condemn white nationalism.

A white nationalist posted a racist anti-immigrant manifesto on the Internet prior to murdering 20 people in a Walmart. Instead of taking the opportunity to call out white nationalist terrorism, Patrick decided to target anti-fascist group Antifa, even though Antifa had nothing to do with the attack.

The group is planning to protest fascism in Texas next month, but Patrick warned the group to stay out of the state.

TX Lt. Gov Dan Patrick warns Antifa, who was planning to come to El Paso, to stay out of TX after the Walmart tragedy

“Stay out of El Paso. Stay out of TX … scratch TX off your map and don’t come in … it is not the time and place for them to come at any time… stay out of TX” pic.twitter.com/JdNxCAUPqL

Dan Patrick is trying to hijack a mass shooting in his own state to indulge his ideological beef with antifa (go figure) while the bodies are still warm. Really just one of the worst people in America right now

So glad @DanPatrick came out in the wake of the #elpasoshooting to say that he’s pro-fascism.

Dan Patrick rambling about antifa while a white supremacist guns down dozens of people https://t.co/4TyLg3xktu

Yes, because the people protesting and defending against the white supremacists committing these terrorist acts are *the real terrorists*

In response to alleged white supremacist shooter murdering as many as 19 people, ~40 injured, @DanPatrick states “Antifa, Stay Out of Texas.” WTF?!?

— About Face: Veterans Against the War (@VetsAboutFace) August 3, 2019

Patrick isn’t the only Texas GOP politician targeting Antifa instead of white nationalists. Senator Ted Cruz (R-Texas) recently introduced a bill to label anti-fascists as terrorists. But the only terrorists are white nationalists who are killing Americans across the country in deadly attacks. And Republicans are only enabling them.