The United States Blues
Home News That time Trump laughingly approved of shooting migrants at one of his... 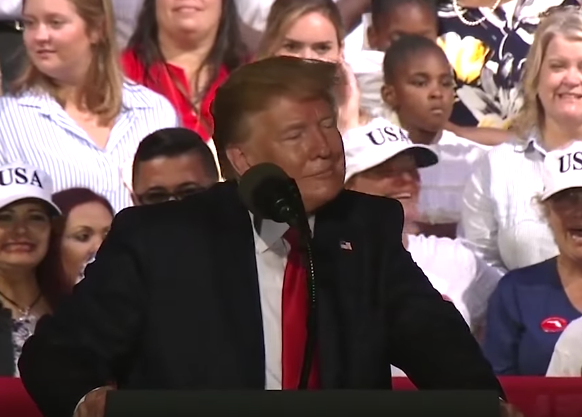 As the nation struggles in the aftermath of a mass shooting in El Paso, Texas committed by a racist white nationalist who hates migrants, a Trump rally back in May has become frighteningly more relevant.

Twenty people are dead after a white terrorist traveled hundreds of miles to the southern border town of El Paso, where he walked into a Walmart and started shooting.

In his manifesto, the shooter railed against immigrants and claimed they are invading the United States.

Apparently, this white terrorist believes the way to handle our immigration issues is to shoot people.

And when you look at how President Donald Trump reacted to someone who suggested shooting migrants during his rally in Panama City, Florida in May, it would seem that Trump incited this kind of violence.

“When you have 15,000 people marching up, and you have hundreds and hundreds of people, and you have two or three border security people that are brave and great,” Trump began. “And don’t forget, we don’t let them and we can’t let them use weapons. We can’t. Other countries do. We can’t. I would never do that. But how do you stop these people?”

“Shoot them!” a person in the crowd shouted.

Note that Trump made zero effort to condemn the call to shoot migrants. He was amused by it. Three months later one of his racist white nationalist supporters murders 20 people at a border city. Trump can claim to support the city of El Paso all he wants, he has the blood of 20 people on his hands. He has been inciting violence against migrants for months and this is the result. And until he outright condemns white nationalism and stops his racist attacks, we are going to see more violence.