The United States Blues
Home Elections The Cable News Ratings May Tell Us The Scope Of The 2018... 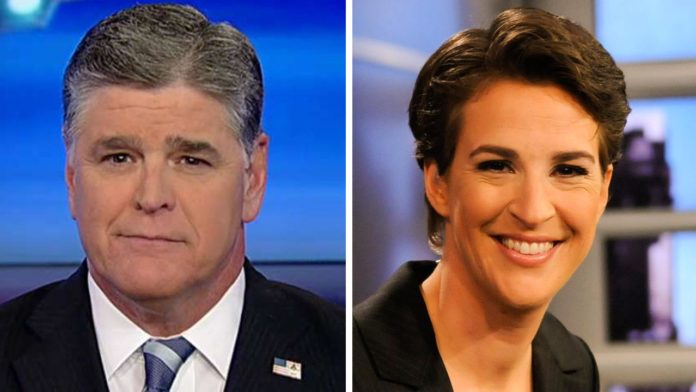 With all of the retirements taking place by Congressional Republicans, it seems safe to say that the 2018 midterm election will be a good one for Democrats, if only because their base is much more motivated to show up and vote than the dispirited GOP, which watches daily as President Donald Trump slips further into endless scandals.

But is there a chance we can look at the current ratings for cable news shows and draw a parallel to what will happen in November?

A recent report from Salon suggests ratings may indeed have a role to play in helping us determine just how massive the Blue Wave will be:

“While both Fox News and CNN lost viewers between 2017 and 2018, the audience for liberal haven MSNBC has skyrocketed by 30 percent. And with midterm elections quickly approaching, Democratic strategists feel encouraged about this changing tide in cable news – and the implications it has about the future of American politics.”

Politico recently drew a parallel between cable news ratings in 2018 and what took place in 2010, which turned out to be a very bad midterm for Democrats with President Barack Obama having just completed his first two years in office:

“Fox News scored its largest average audiences since its launch in the first quarter of 2010, as the Barack Obama administration approached its first midterm election cycle. That fall, Republicans gained a whopping 63 seats in the House. Given the partisan divide in cable news today, it is not far-fetched to imagine there is a strong link between viewership and voter sentiment.”

Midterm elections are essentially about one thing: They’re a chance for the voters to let the party in power know how they feel about what’s being done in Washington on their behalf.

That being said, the real candidate on a midterm ballot is the incumbent president. If he or she is popular, then losses should be minimal for that president’s party. And if that axiom holds true to form, a man as controversial, divisive, and deeply unpopular as Donald Trump is very bad news for Republicans.

Trump’s current approval rating of 40-41 percent suggests that 2018 could be catastrophic for the GOP.

While ratings for Sean Hannity’s show continue to remain strong, they’re down from where they were during the Obama administration. His 9 p.m. competition, Rachel Maddow, however, has seen her ratings spike since Trump was elected.

More troubling for Fox is the controversy created by 10 p.m. host Laura Ingraham, who criticized Parkland school shooting survivor David Hogg and quickly saw dozens of advertisers on her show pull their ads in response. While Ingraham is still on the air, without steady ad revenue, she could be removed by Fox and replaced with someone who doesn’t have the same baggage.

‘It Doesn’t Have to Be This Way’

Republican strategist Stuart Stevens recently commented that the dramatic rise of MSNBC since Trump took office suggests people are looking for a network the will serve as regular opposition to the White House:

“I think there are a lot of people out there who are dramatically troubled by the direction of the country, and they would like to be reminded that a) they’re not alone, and, b) there is an alternative. I basically consider MSNBC the ‘it doesn’t have to be this way’ channel.”

Should Democrats be enthused by what’s transpiring in the cable news wars? Yes, but that doesn’t mean they don’t still have to show up and vote on Election Day. As with any election, turnout — and votes — are what matter most.