The United States Blues
Home News The ‘Christian’ response when an Evangelical pastor calls for standing against white... 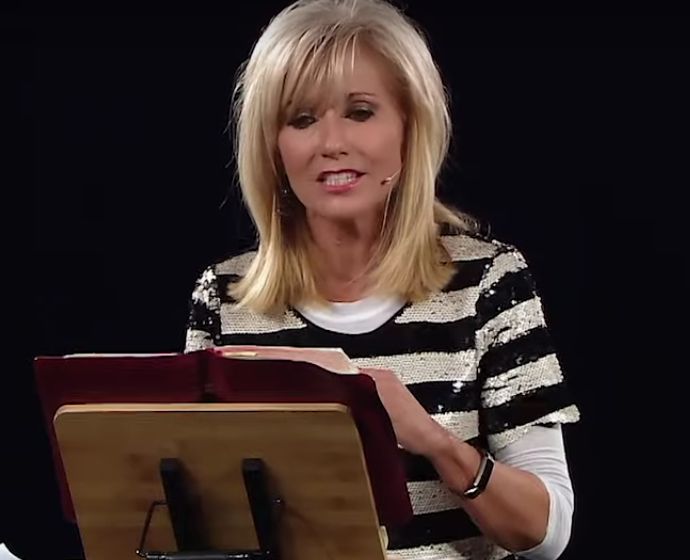 An evangelical pastor called upon Christians to stand up to racism and white nationalism, but they chose to attack her instead, thus demonstrating that white nationalists have taken over Christianity in America.

Beth Moore is an evangelical, but she is also one of the few evangelicals who are critical of President Donald Trump, whose racist and violent rhetoric incited a white nationalist to kill 22 people in El Paso less than two weeks ago.

In the wake of the shooting, Moore courageously addressed the slayings and called for Christians to finally see the light and reject white nationalists, who like the shooter in El Paso, often invoke Christianity and God to justify their evil actions and ideology.

Any “Christ” that can be invoked in support of white nationalism is a false Christ of the highest, most hellish order. An anti-Christ. A wholly-opposite christ. No such christ is the Christ Jesus of Scripture who taught His followers a love that sacrifices life & limb for others.

Let it be known, let it be declared by genuine followers of Jesus, that the man who opened fire in El Paso may invoke a christ of some kind but it is NOT our Christ. His christ would be unrecognizable to us. Unrecognizable in Scripture. We claim no christ of white nationalism.

Christian leaders, LEAD. Do not shrink back in cowardice. Be bold. Be clear. Do not assume people know where you stand. History will prove this to be a most critical hour and our silence to have been our shameful complicity.

It’s a good message that any true Christian would follow. Unfortunately, many Christians are racist, so instead of fighting back against hate, they attacked Moore.

Beth, my wife and daughters are attending one of your upcoming events, but you keep doing this, and it’s disturbing. Just who exactly is invoking Christ in support of white nationalism?

Beth, I’ve been a fan of your teaching for years and years. And as a friend from afar. Stop. Stop weighing in on politics. It takes our eyes off of the King of Kings and adds to the chaos of this world. Just preach truth. I’m a Christian and your turning ME off.😕

I’m deeply saddened that so many are trying to equate being pro american or Christian with being a white supremacist. They couldn’t be more opposite!

Beth Moore is always so one sided in her condemnation of things
Which is cowardly!

Politics aren’t to blame. Guns aren’t to blame. A lack of fathers and a lack of moral absolutism is to blame. Stop trying to twist this tragedy to fit a political agenda that it doesn’t. Trump isn’t any more of a white nationalist than you are a genuine theologian.

Fitting in with the latest guilt hoax of the day? Aren’t you white? Now denying allegiance, dishonoring those who gave their lives for you? Damn, Beth. You’ve gone completely whacko.

No born again evangelical that I’ve ever known supports White Nationalism. Only kooks. Who is even arguing with you and your progressive friends? This. Is. A. Fake. Evangelical. Problem.

Clearly, the hate is strong with conservative evangelicals. And, sadly, it’s too late to save their souls.