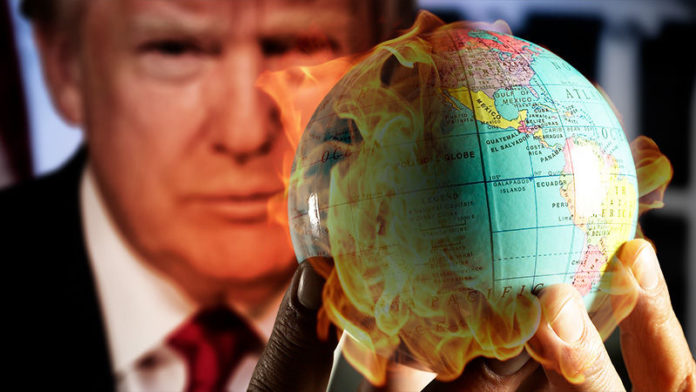 The president cited a former Greenpeace official who was booted from the organization years ago to suggest that human activity has nothing to do with climate change:

Patrick Moore, co-founder of Greenpeace: “The whole climate crisis is not only Fake News, it’s Fake Science. There is no climate crisis, there’s weather and climate all around the world, and in fact carbon dioxide is the main building block of all life.” @foxandfriends Wow!

First of all, Moore is NOT a co-founder of Greenpeace. He also hasn’t been a member of the group in decades, as the organization pointed out in a reply to Trump:

Patrick Moore was not a co-founder of Greenpeace. He does not represent Greenpeace. He is a paid lobbyist, not an independent source. His statements about @AOC & the #GreenNewDeal have nothing to do with our positions.
https://t.co/u0chD1Ne0H pic.twitter.com/TfwtwYZ98R

And then other social media denizens joined the fray, taking the president down several notches with facts and science:

when you applied to build a sea wall at your tacky golf resort in Ireland, the reason you gave was to protect your property from “global warming and its effects.” that not my language, that’s a direct quote from your application

He wasn’t a founder. He worked for them and Greenpeace let him go because of his sensational comments. But keep getting your info from FOX.

For the sake of my infant son and the rest of the world please shut your goddamn mouth. One person with zero scientific training does not no more then the majority of the world’s scientists who have stated time and time again if climate change is not addressed now we are dead

A cloud of carbon dioxide once killed an entire village of 2,000 people. Yes, we need carbon to make up the cells of our body. Yes, we exhale carbon dioxide and plants need it to live. But all things in their proper proportion, or things get deadly.https://t.co/0RHHnloEB0

Here’s a suggestion for President Trump: Turn off the TV, put down the cell phone, and go take a nap. At least that way you aren’t doing any real harm.