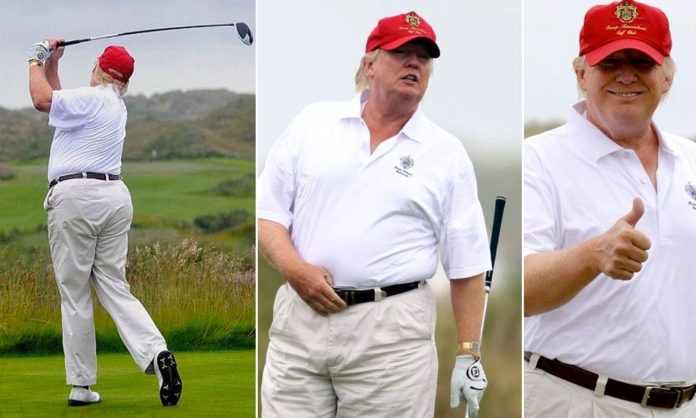 Investigations like the one being conducted by Special Counsel Robert Mueller are expensive. But it turns out they’re nowhere near as costly as providing mindless recreation for the 45th president, Donald Trump.

To hear Trump tell it, however, the Russia investigation is spending money wildly. Consider this tweet:

When will this illegal Joseph McCarthy style Witch Hunt, one that has shattered so many innocent lives, ever end-or will it just go on forever? After wasting more than $40,000,000 (is that possible?), it has proven only one thing-there was NO Collusion with Russia. So Ridiculous!

As with nearly everything Trump tweets, the $40 million figure is a blatant lie. The actual number, according to Reuters, is $25.2 million.

Now let’s contrast the taxpayer money spent on the Mueller probe with what Trump has wasted so far on his endless golfing. That number is a stunning $84 million according to Trump Golf Count.

And now for the kicker to this story: The Mueller probe has actually made money. CNBC reported back in September that thanks to forfeitures from Trump’s former campaign chairman, Paul Manafort, Mueller has turned a profit with this investigation:

“Mueller may have also paid for his own investigation. That’s because, as part of his plea deal with the special counsel, Manafort agreed to forfeit real estate and cash estimated to be worth between $42 million and $46 million.”

Not only is Robert Mueller doing this country a great service by uncovering connections between the president and Russia (among other countries), he’s also paying for his investigation with a healthy return on investment. Hell, Mueller is doing better than the stock market under Trumponomics.

So here’s a modest proposal: Robert Mueller needs to keep investigating and Trump needs to stay in the White House until the federal marshals show up, slap the cuffs on him, and take him away to prison. Sure, it’ll cost us a lot of money to incarcerate Trump for the next decade or so, but at least we’ll have the satisfaction of knowing the Donald won’t get to play golf ever again.