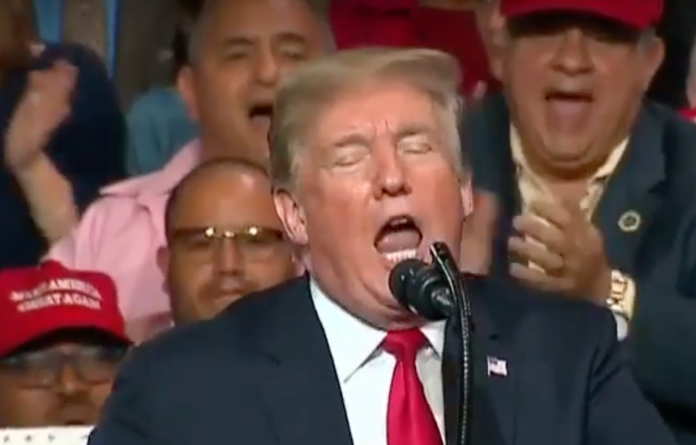 The Washington Post’s Fact Checkers deserve all of our praise for their valiant efforts to record the non-stop flood of lies emanating from Donald Trump. Today, Fact Checker columnist Glenn Kessler breaks down some of Trump’s most misleading statements on the economy. Although Trump has always maintained that his instincts are correct on any given topic, it’s the economy that will have the last word on the matter.

The laws of economics are a force much greater that Trump’s gut instincts.

Kessler begins his case with his Fact Checker piece: “Trump’s trade rhetoric, stuck in a time warp.” The piece very accurately described how Trump’s take on the economy as a candidate would backfire if he were to become POTUS.

1. “During the 2016 presidential campaign, The Fact Checker repeatedly pointed out that Trump was using a ridiculous metric for “winning” or “losing” on trade, based on a fundamental misunderstanding of economics,” Tweeted Kessler.

“Anybody we do business with beats us. We don’t win at trade,” said Trump.

Trump appears stuck in a time warp and not understanding the realities of the interconnected and globalized modern economy. He believes we lose money when there is a trade deficit, which is a fundamental misunderstanding.

His solution to the incorrectly-posed problem is to raise tariffs on goods from places like China. However, that doesn’t result in gaining money. Instead, it discourages trade and can discourage job creation at home as well. Trump’s positions on manufacturing and currency manipulation were likewise determined as deserving of Four Pinocchios.

Kessler reinforced his assertion that Trump’s claims about trade deficits deserve the highest (or lowest?) dishonor of the Bottomless Pinocchio. That means that Trump has repeated his false statements at least 20 times, but when it comes to the US trade deficit, he repeated inaccuracies 138 times, topping the list of the most egregious misstatements.

2. “During his presidency, his repeated statement that the U.S. “loses” money from trade deficits now ranks at the top of our list of Bottomless Pinocchios.”

During his presidency, his repeated statement that the U.S. "loses" money from trade deficits now ranks at the top of our list of Bottomless Pinocchios. https://t.co/8uEFGNigkp

3. “We have also pointed out when the president has falsely claimed how proud he was that the trade deficit was going down.”

Next, Kessler examines Trump’s statements that starting trade wars is reducing the trade deficit. In fact, he claimed the quarterly trade deficit declined by $52 billion and that “nobody reports it.”

As with most things Trump does, he claims success, regardless of the reality.

The Fact Checkers discovered that the trade deficit had actually increased between November 2017 and November 2018 and was expected to be “one of the highest on record.”

4. “But a trade deficit depends on so many factors, such as the relative strength of currencies, economic growth rates, and savings and investment rates. Trump’s tax cut, for instance, probably helped boost it.”

As Trump tried to defend his new tariffs on steel and aluminum, the Fact Checkers once more had their work cut out for them.

“We are going to keep explaining this until we are blue in the face but countries do not “lose” money on trade deficits.”

“For some reason, the president must have missed this lesson in economics class when he attended Wharton.”

Kessler concludes that Trump’s gut instincts about “winning” the “trade wars” have proven worthy of bottomless Pinocchios. Trump might as well be tilting at windmills.

“So, now that the laws of economics have proven stronger than Trump’s gut instincts, maybe he will finally abandon this fallacy?”

So, now that the laws of economics have proven stronger than Trump's gut instincts, maybe he will finally abandon this fallacy?

Is Trump capable of abandoning a fallacy, even when reality comes crashing down upon it? We doubt it. We can apply this problem to more than just economics, of course, and so goes the tragic presidency of #45. Let’s all work to bring back the rule of facts as soon as possible.

See Trump lay it on thick about trade deficits below: