The United States Blues
Home Activism The Trump Baby Blimp may be flying over the real Trump’s inflated... 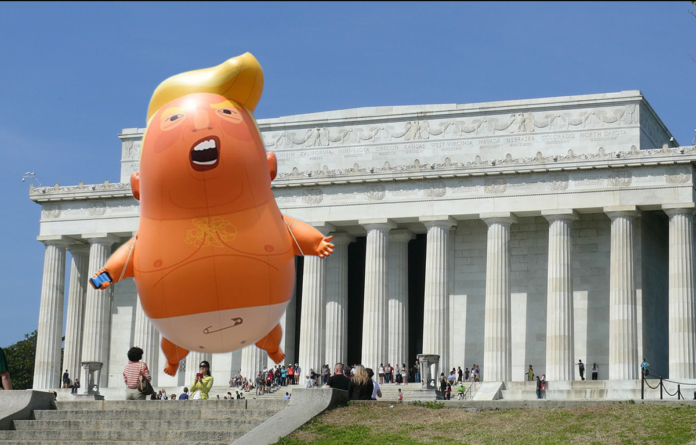 Editor’s note: We have gotten many inquiries from people wanting their own Trump Baby Balloons … you can get them here

Since July 2018, activist group, Code Pink has been working to bring the Baby Trump blimp to Washington, D.C. to fly over the nation’s capital. Then, the self-described women-initiated grassroots peace and social justice movement planned to fly it at Trump’s proposed military parade, which (fortunately) never happened. Now they have secured a majority of funds and protest permits to bring the now-familiar blimp seen in the U.K. over the 4th of July party that Trump is hijacking for himself. (Because of course, he is.)

If the blimp takes to the air, it will be hard to miss at 20-feet long at “any open grassy area nearest to Lincoln Memorial.” The group has raised over $13,500 on their GoFundMe at the time of this writing, with a goal of $20K.

Giant Baby Trump Blimp Group will protest President's fourth of july celebration near Lincoln Memorial.@codepink have managed to raise more than $13,000 in donations towards their goals of getting the Baby Trump blimp to Washington.https://t.co/ZWWfVf0dnE

In a statement, Code Pink called for supporters to share the hashtag: #FreedomFromTrump

“Help us raise the message high — support our Freedom from Trump rally and Baby Trump Blimp extravaganza just hours before Trump addresses the nation from The Lincoln Memorial. Let’s have our #FreedomFromTrump message trending while he speaks.”

Although the celebrations have avoided political rhetoric in the past, this time Trump may turn the festivities it into another disgusting Trump rally in his “Salute to America” address.

According to WJLA, the group can bring the balloon, but so far may not be able to inflate it. Perhaps all of Trump’s hot air will do the trick for them.

“Code Pink, an activist group that owns a 20-foot long ‘Baby Trump’ balloon, has had their application to fly the blimp approved by the National Park Service, but the NPS hasn’t yet granted them a permit or given them permission to inflate the balloon.”

As PoliticusUSA reported, Trump will be giving a speech not far from where the blimp will (hopefully) fly. As he talks, the giant baby Trump could be flying over his head.

“Trump has taken the non-partisan national 4th of July celebration and turned into a propaganda party for his presidency. Trump has decided to turn the national holiday into a campaign rally where he will give a speech to the entire country from the steps of the Lincoln Memorial. Protesters have seized on the opportunity presented by Trump’s massive ego to plan day-long rallies and protests to turn the president’s propaganda party into a national rejection of Trump.”

At least as the nation endures one more instance of Trump making everything all about him, even our Independence Day, we may have a highly visible protest nobody will be able to miss. That is, unless someone pops the balloon, as a Trump supporter did in the U.K.

In 2019, what could be more patriotic for the 4th of July than opposing Trump and his toxic, dangerous, and utterly corrupt administration?

Another group of 250 people plans to participate in a First Amendment protest near Freedom Plaza, having also secured the NPS permits.

.@CodePink announced they will fly a diapered baby Trump blimp in Washington, D.C. when @realdonaldtrump speaks on the Fourth of July – to show the president what a "big baby he is." Via @DailyCaller https://t.co/MUWIXlHHbV