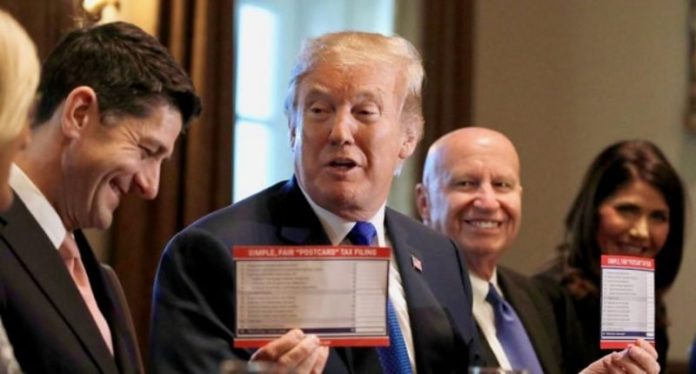 When they passed their massive tax cut plan in 2017, President Donald Trump and his allies in the GOP-controlled Congress swore that the new tax plan would benefit everyone. Matter of fact, as far back as 2016, Trump was giving that assurance, commenting:

“Everybody is getting a tax cut, especially the middle class.”

But like nearly everything Trump says, it turns out the tax promise was just another massive lie that tens of millions of Americans are feeling as Tax Day approaches next Monday.

The Center for American Progress released a report based on data from the non-partisan Institute on Taxation and Economic Policy, and the results are far from what Trump and the GOP promised.

According to the report, 10,260,263 American families saw their taxes increase last year, thanks to the president’s 2017 Tax Cut and Jobs Act.

ThinkProgress notes that the sticker shock has been a rude slap in the face for many middle-class taxpayers who are used to getting refunds:

“As taxpayers have been filing their 2018 taxes in recent weeks, many have found that they are not getting the refunds they have in the past or even owe the federal government money. The bill’s supporters have dismissed these concerns, suggesting that the higher take home pay thanks to the bill means people were not having as much excessive withholding — a feature, not a flaw.”

But the simple fact is that the tax cut was aimed to cut tax rates for the riches, not the middle class, according to Steve Wamhoff, who authored the Institute on Taxation and Economic Policy’s study:

The results of the tax cut could come back to haunt Trump and the GOP as soon as next year, when control of the Senate will be in the balance and the president will be seeking a second term in office. Angry voters aren’t likely to be receptive to more empty promises when they’ve already been burned.