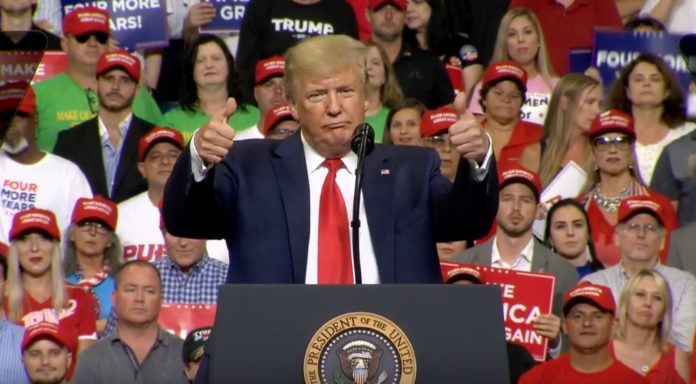 Even though he has 64 million followers on Twitter and can send the stock market into a tailspin with one tweet, President Donald Trump’s 2020 campaign is preparing to launch a social network app for smartphones in an effort to boost donations, volunteers, and sway potential voters, Politico reports:

The upcoming launch is the latest sign of how Trump’s team, which ran a ragtag operation in 2016, is using its huge coffers to drive a more professional and data-driven operation. While campaigns have had apps for years, the Trump app is expected to let the president‘s team track followers in a more comprehensive way than ever before in its bid to secure the president another White House term.

A major focus of the app is to make sure the campaign is in constant contact with potential voters as part of a larger strategy to guarantee that the president’s loyal base of supporters turns out on Election Day.

The main roadblock to such any social media app being a success? Convincing people to download it at a time when many are skeptical about putting such a program on their phones.

Despite that potential obstacle, GOP strategist Rory McShane says he doesn’t think Trump voters will blanch at adding the social network app to their devices:

“Trump supporters are more dedicated and committed. If there is any campaign where they have a shot at making this work, it’s the Trump campaign.”

The Trump campaign also sounds reluctant to actually discuss their new app, ignoring questions from Politico. But campaign manager Brad Parscale had this to say at a rally late last year:

“This is how Donald Trump stays president for four more years,” said Parscale, holding up his iPhone onstage at a Trump rally last year. “Now this phone is how we connect with you. It’s how we turn you into the army of Trump.“

Betsy Hoover, who was online organizing director for Barack Obama’s 2012 campaign, says if the Trump 2020 team is betting on their app being a game-changer at a time when the president is historically unpopular, they’re likely to be disappointed:

“An app itself is not the answer. You need a program and a strategy that engages supporters and builds community around your campaign. An app can help you achieve that strategy — but the strategy must be the primary focus and drive the usage of the app. If your goal is to recruit and train new people, an app is probably not your tool. If your goal is to increase the action your best supporters are taking, an app might be a great tool for management.”

While the Trump social media campaign app may sound good in theory, it remains to be seen how exactly it will boost the president’s political fortunes with independent voters or those who voted for Trump in 2016 after supporting Obama in 2012. And it seems unlikely that an app can end a trade war that’s costing Americans thousands of dollars each year at the cash register.