The United States Blues
Home News The Trumps Stand In Silence As Other Presidents And Wives Recite Apostles’... 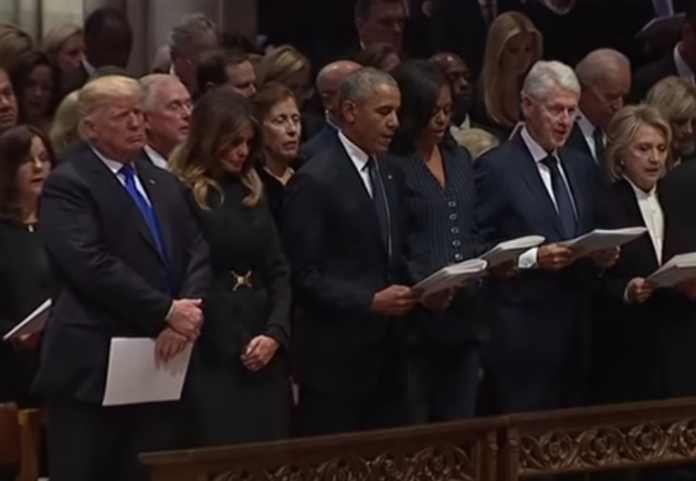 If President Donald Trump was truly an evangelical hero, he would have recited the Apostles’ Creed during the memorial service of former President George H. W. Bush at the National Cathedral on Wednesday. Instead, he refused.

During what turned out to be a beautiful service that also served as a rebuke to Trump, everyone was asked to stand and recite that Apostles’ Creed, an easy task for any true Christian. But Trump did not even to pretend to be a Christian as he and First Lady Melania Trump stood silently as all the former presidents and their wives recited the prayer, including former President Barack Obama, who endured accusations of being a secret “Muslim” throughout his presidency from so-called conservative “Christians.”

The prayer is as follows:

I believe in God, the Father almighty,
creator of heaven and earth.
I believe in Jesus Christ, God’s only Son, our Lord,
who was conceived by the Holy Spirit,
born of the Virgin Mary,
suffered under Pontius Pilate,
was crucified, died, and was buried;
he descended to the dead.
On the third day he rose again;
he ascended into heaven,
he is seated at the right hand of the Father,
and he will come to judge the living and the dead.
I believe in the Holy Spirit,
the holy catholic Church,
the communion of saints,
the forgiveness of sins,
the resurrection of the body,
and the life everlasting. Amen.

Here’s the video of The Trumps refusing to recite the creed below:

Trump’s refusal to recite the creed did not go unnoticed as Twitter users repeatedly hammered him for staying silent and roasted evangelicals for their hypocrisy.

The Apostles’ Creed is one of the prayers most core to Christianity. It is the statement of faith in one God, and is said daily by Christians across the globe. Today, one very high-profile Christian didn’t say it. https://t.co/aTHWNkAxF0

Hey, Trump guys. The President says he is a Christian. Why won’t or can’t he recite the Apostles’ Creed? Perhaps you know a reason. I’m really asking. https://t.co/DZdLPfrfzi

It’s SO weird that Barack Obama (the “Muslim”) knew all the words to the Apostles’ Creed, and Donald Trump (the Evangelical hero) didn’t know any of them, and didn’t even bother to read them. #GeorgeHWBushFuneral

Are you telling me the so-called “Muslim” president knew all the words to the Apostles’ Creed, but the ‘Christian Conservative’ President, did not?https://t.co/4RJCjomBSA

The Trumps aren’t reading along with the Apostles’ Creed. It’s right there on the program.

Striking that all the former Presidents and First Ladies recited the Apostles Creed, but Trump and Melania stood silently and did not. The creeds are at the heart of historic orthodox Christianity

In 2016, someone who worked for HRC at State offered me this advice about writing for her: At the end of the day, she’s a Methodist from the Midwest.

We appealed to red-state voters on moral grounds. They chose a guy who doesn’t know the Apostles’ Creed:pic.twitter.com/wz4Fy0Qlvx

I assume the President was looking for those two Corinthians during the Apostles Creed.

Evangelicals who support Trump have a lot of explaining and soul searching to do.