The United States Blues
Home News The View slams Kellyanne Conway for choosing allegiance to Trump over her... 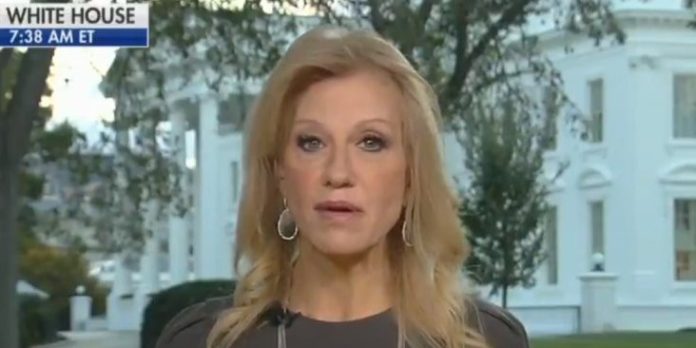 The ladies of “The View” took aim at White House counselor Kellyanne Conway on Wednesday for putting her allegiance to President Donald Trump ahead of her loyalty to her husband and family as the feud between Trump and George Conway escalates.

For two days now, Trump has chosen to respond to George Conway’s Twitter criticism, particularly after Conway posted information about psychiatric disorders to question Trump’s mental health in the wake of a 50 post Twitter spree over the weekend.

Trump responded by calling Conway a “total loser” and followed up that attack by trying to emasculate him as “Mr. Kellyanne Conway.”

Conway continued to hold his own against Trump, however, and likely the feud will continue since Trump is obsessed with people who criticize him.

But this time it’s different because Conway’s wife Kellyanne Conway works closely with Trump inside the White House and often defends the president on television.

She recently responded to the feud by claiming that her husband once supported Trump, but said that she’s been too busy dealing with their children to really have time to read what George has posted.

She’s obviously deflecting, but her refusal to defend her husband, especially in light of Trump’s recent attacks, has “The View” hosts questioning whether she is sacrificing her family to support Trump.

“It makes sense that Trump would get in the middle of this because he likes to separate families,” Joy Behar quipped.

Abby Huntsman noted that George Conway has said that he tweets out his criticism of Trump so that he’s not yelling at his wife about it at home, a marital strategy she disagrees with.

Sunny Hostin compared the Conways to married couple James Carville, a Democrat, and Mary Matalin, a Republican. They have been married for years and the reason why is because they don’t talk about politics at home. So, Hostin understands why George Conway tweets. It’s better than getting into fights day after day at home.

Meghan McCain expressed her sympathy for the Conways’ four children, and asked Kellyanne Conway if Trump is worth ripping her family apart.

“I feel bad for their kids,” McCain said. “I also think that they just have a really bizarre relationship, and I’ve said it on this show before, I couldn’t be married to someone who was publicly slandering my job or my life every day, or my boss. I just want to know if it’s worth it for them, working in the White House for President Trump during only possibly a four-year term, we don’t know what’s going to happen, if he’s going to get re-elected. Was it worth it to rip your family apart for this? Because it wouldn’t be for me.”

Hostin went on to theorize that Kellyanne Conway agrees with her husband while Whoopi Goldberg urged the couple to seek therapy.

Or, you know, Kellyanne Conway could just exit the administration for the sake of keeping her family sane and together instead of peddling her toxic boss’ lies and hate every day. That would likely be therapy enough.