The United States Blues
Home Environment This 14ft high wall proposed by the Navy is one DJT might... 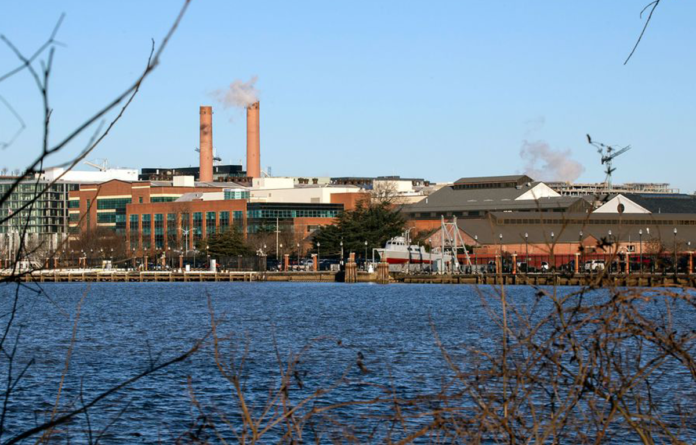 We’re all beyond exasperated at watching the 45th President hold Americans hostage to fulfill a campaign slogan and promise to uneducated and almost certainly racist voters. It looks like he may shut down the government again over a wall, but there is one wall that appears to be much more necessary and needed, and it’s less than two miles southeast of the U.S. Capitol.

There, sitting on “D.C.’s forgotten river,” the Anacostia, sits the Washington Navy Yard, the oldest navy installation established in 1799. It houses the highest ranking officer in the Navy, the Chief of Naval Operations, Admiral John M. Richardson. In addition, it’s the workplace for the Naval Facilities Engineering Command, the Judge Advocate General, and the Navy Inspector General.

Although Trump and Republican representatives think it’s ok to deny they have a responsibility in confronting climate change, the United States Navy already has plans to build a 14-foot flood wall around the Navy Yard. The wall is intended to protect the historic complex from rising sea levels caused in part by climate change.

The Navy is considering erecting a 14-foot flood wall around the Washington Navy Yard to protect the historic complex along the Anacostia River from rising sea levels.

Bloomberg News examined the Naval Facilities Engineering Command document, proposed by military engineers, based on the realization that climate change is real.

“Military engineers proposed the wall in a study, obtained by Bloomberg News through a public-records request, that describes a structure as long as 1.5 miles, to protect three dozen buildings at a cost of as much as $20 million. It’s the latest example of a federal agency getting ready for climate change, despite the Trump administration’s public dismissal of the threat.”

It’s not just the Navy Yard though. The Defense Department made a list of 18 other military installations across the country, ranking them based on the level of risk due to recurrent flooding. The facilities along the coast at Key West, San Diego, Pearl Harbor, and Guam were most vulnerable.

The study details exactly how many feet of water the Navy expects to contend with thanks to climate change:

To contend with the very real rise in the waterline, they have proposed five solutions, but none of them are perfect. In fact, they may reasonably expect that if they construct a wall, they could potentially help flood their surrounding neighbors, including the stadium where the Washington Nationals play.

“[The study] proposes five options to protect the Navy Yard; four of those options entail surrounding most of the site with a permanent wall, as well as pump stations to move whatever water makes it over or around the wall.”

#NavyCapital : PSEG CEO speaks up about climate change: “The time to act is now” https://t.co/4jbabJ6Ceq

However imperfect a wall solution may be, at least the Navy isn’t burying their collective heads in the waves about climate change, as it seems Trump is doing. The Navy facilities command even published a “handbook” for climate change resilience and adaptation, published in 2017.

We know how much Trump claims to love the military, although his respect for actual veterans and the generals he once surrounded himself with seems to be questionable at best. Would he consider reading the Navy handbook on climate change? Or will he and the Republicans keep their heads in the waves and absolve themselves from any responsibility to the human race or the planet?

We all know how Trump loves a wall. Will he ignore the wall proposed by the Navy? At least their wall was based on things like facts, expert advice, and reality.

Managing Climate Change: Lessons from the U.S. Navy – @HarvardBiz: 'The navy cannot afford to treat climate change as a partisan issue. The DoD knows that the mid-century world for which the admirals are now planning will be different from today’s…' https://t.co/wgSTkk1YKU pic.twitter.com/A9D1hfIetN