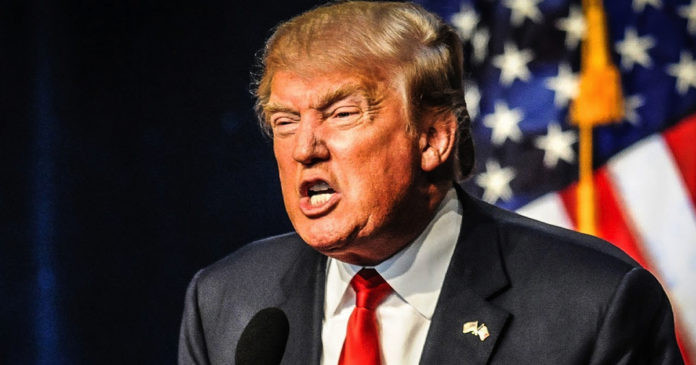 As we all know, Trump recently fired his pollsters, including Kellyanne Conway’s old firm, because his internal campaign polls showed him losing badly to former Vice-President Joe Biden in just about every battleground state. Biden is even within two points of Trump is red state Texas.

Trump still insists that he leads in all the polls in every state, and it appears that he thinks changing the wording on his internal polls is enough to turn the tide.

In a new set of polling questions on the campaign website, the multiple choice questions ask who would be better on several different issues. One of the choices, of course, is Trump. But the other choice is a slanderous characterization of Democrats often used by Trump on Twitter and at rallies.

“Who would you rather see fix our Nation’s shattered immigration policies?” the first question asks.

The choices are “President Trump” or “A MS-13 Loving Democrat”. (note: their bad grammar, not ours)

“Who do you trust more to protect America from foreign and domestic threats?”

The choices are “President Trump” or “A Corrupt Democrat”.

And it goes on like that for ten questions in all.

Here are the rest of them.

3. Who would you rather handle our Nation’s economy?
President Trump
A Radical Socialist Democrat

4. Who do you believe is more transparent with the American People?
President Trump
A Lying Democrat

5. Who do you trust to NOT raise your taxes?
President Trump
A High Tax Democrat

6. Who do you believe will ALWAYS put America FIRST?
President Trump
A Sleazy Democrat

7. Who do you believe will keep their promises?
President Trump
A Lyin’ Democrat

8. Who do you believe will fight for you every day?
President Trump
A Low Energy Democrat

9. Who do you believe is better for America?
President Trump
A Low IQ Democrat

10. Who will you vote for in 2020?
President Trump
A Radical Socialist Democrat

If ever there were a poll designed to poison the judgment of voters, this is it. It’s also clearly designed in a way so that Trump’s supporters will be more inclined to participate.

This is not a scientific poll such as those run by Quinnipiac, which shows Trump losing to Biden and the other top Democrats in the 2020 presidential field.

This Trump poll is nothing but pure propaganda, and while it may soothe Trump’s ego, it won’t do anything to help him win in 2020 because it is highly misleading and clearly biased. This is the kind of thing authoritarian leaders do to oppress their political opponents.