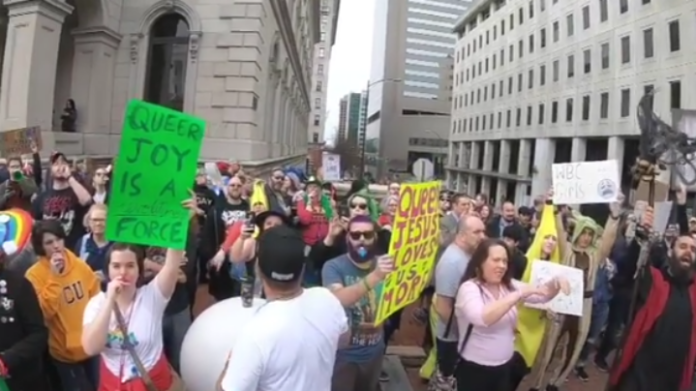 The Westboro Baptist Church found itself woefully outnumbered and unable to spew their hate after a group of metalheads organized a counter-protest and drowned the hate group out using kazoos.

The hate group protests LGBT rights and same-sex marriage by protesting the funerals of dead American soldiers and other events. Usually, only a handful of people show up to these hateful and disrespectful protests, which often result in police and local residents running them out of town or organizing a much larger counter-protest.

The group used to be led by evangelical “Christian” fundamentalist Fred Phelps and comprised mostly of his own family members, who are based in Kansas, but has dwindled since his death and as the LGBT community has been increasingly accepted in the United States.

But on Monday, the group thought it could spark a resurgence of hate in Virginia by protesting against Delegate Danica Roem, the state’s first openly transgender lawmaker who surprisingly beat longtime Republican incumbent Bob Marshall, who has referred to himself as Virginia’s “chief homophobe.”

Fortunately, Roem had reinforcements to back her up because of her time as a vocalist for the metal band Cab Ride Home.

According to the Virginia Mercury:

The Kansas-based hate group said it came to Virginia in part to demonstrate against Del. Danica Roem, D-Manassas, who is the state’s first and only openly transgender lawmaker.

Roem also happens to be a metal singer, which prompted Richmond-based singer Randy Blythe, who fronts the well-known band Lamb of God and considers Roem a friend, to organize what he called a “counter-party.”

Blythe handed out kazoos as part of the protest, which were used to drown out the Westboro Baptist Church members, who were outnumbered 200 to 6.

“These people are coming out and speaking a bunch of ignorance about my friend,” Blythe said. “I don’t like that. So we came out and just drowned them out. That’s the easiest way. There’s no point in engaging these people.”

Roem responded to the Westboro Baptist Church by holding a fundraiser that netted $25,000.

“I set out to make the best out of a bad situation by doing what a good candidate for office should do,” Roem said. “Flip the script on something negative by raising money off of the response without amplifying the original negativity and driving a unifying message about love conquering hate.”

Metalheads saved the day and the Westboro Baptist Church members retreated with their tails tucked between their legs. Once again, love won against hate.

THIS is how you deal with clowns like the #westborobaptistchurch. They want hate. They want anger. They want screaming arguments. Most importantly, they want lawsuits- many of their members are attorneys just waiting for someone to punch them so they can sue the pants off them. What did RVA give them today? Outrageously costumed freaks. Dancing. Head banging. Drumming. Vuvuzelas. Oh yeah– and kazoos. LOTS of kazoos. The noise was INCREDIBLE– no one could hear a single word they said. They have the right to say those ignorant things- but you have the right to throw a party so loud they leave early, looking totally defeated. And that’s EXACTLY what happened today- we had a blast, & they burned through some of their bank account getting to our town. TOTAL VICTORY, so BEAT IT, KOOKS. I didn’t take a single photo today- too busy partying in the streets, MY STREETS. Everyone but the #westborobaptistchurch had a good time today- smiles all around, just the way I like it. Now I can get some rest & go back to my normal craziness. Thanks for showing up so early, RVA- y’all went HARD today. 🔥🔥🔥 #kazoo #counterparty #champagnejam #beatitkooks