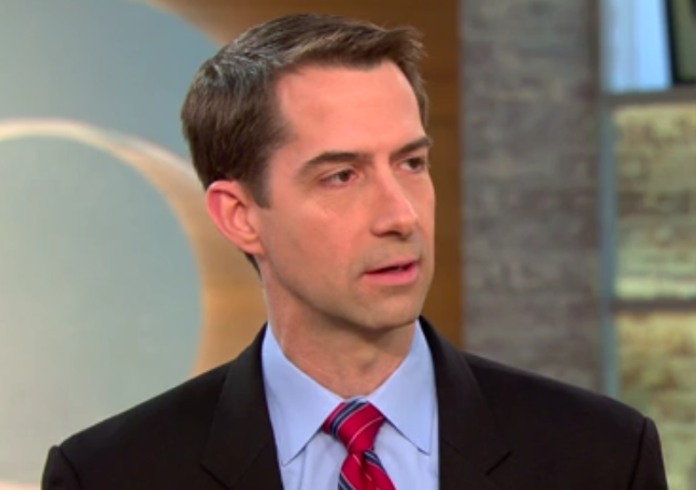 Senator Tom Cotton (R-Ark.) insulted his own constituents on Monday by excusing President Donald Trump’s trade war because farmers are not sacrificing their lives, just their livelihood.

Trump escalated his trade war with China Monday by enacting a new round of tariffs, which were promptly followed by retaliatory tariffs from China.

The tariffs have already significantly harmed farmers across the country as China refuses to purchase agricultural products such as soybeans from the United States.

Farmers make up a large part of Cotton’s constituency, but rather than stand up for them against Trump’s incompetence and recklessness, he claimed their sacrifice is “minimal” because they still have their lives.

“There will be some sacrifices on the part of Americans, I grant you that, but I also would say that sacrifice is pretty minimal compared to the sacrifices that our soldiers make overseas that are fallen heroes that are laid to rest in Arlington make,” Cotton told CBS This Morning.

Cotton continued by claiming farmers “understand China is a serious competitor to the United States and wants to displace us around the world and when you look at the sacrifices that soldiers, sailors, airmen and Marines make around the world, they’re willing to bear some of those sacrifices in the short term to hopefully in the long term ensure our long-term prosperity and security.”

“There will be some sacrifice on the part of Americans, I grant you that. But also that sacrifice is pretty minimal compared to the sacrifices that our soldiers make overseas that are fallen heroes or laid to rest,” @SenTomCotton on trade war with China pic.twitter.com/lqlEZtaeBs

So, Cotton is okay with long-term losses for just a short-term gain? Because that’s what is happening here.

Farmers are going bankrupt and many may never recover and that will deal a blow to the economy and our food supply. And all because Republicans are trying to stave off China becoming the top economy in the world for just a little while longer. It’s a pointless trade war that is only hurting our own nation and escalating the risk of a recession that will plunge the world into economic chaos.

This trade war is not going to end well for farmers and they will have to decide in 2020 whether voting for Trump again is worth their lives being destroyed. And Arkansas farmers will have their chance to oust Cotton in 2020 as well.