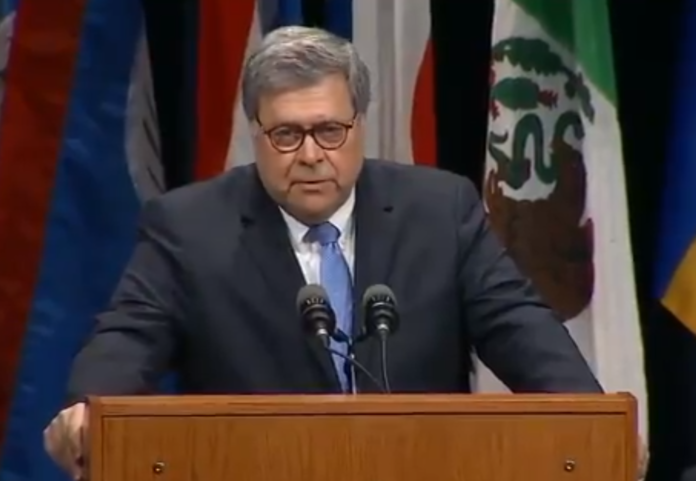 Just a day after the 75th anniversary of the D-Day invasion, Attorney General William Barr decided it would be a good time to claim that his return to the Department of Justice was a great deal like the 1944 Battle of Normandy which left 4,414 Allied forces dead.

Speaking at the FBI academy on Friday, Barr remarked:

“As we’ve been watching the coverage of June 6, 1944 — D-Day — I had the thought that my arrival this time felt a little bit, I think, like jumping into Sainte-Mère-Église on the morning of June 5, trying to figure out where you could land without getting shot.”

AG Barr: “As we’ve been watching the coverage of June 6, 1944 D-Day, I had the thought that my arrival this time felt a little bit, I think, like jumping into Sainte-Mère-Église on the morning of June 5, trying to figure out where you could land without getting shot.” pic.twitter.com/D36xU0uYSj

Yeah, it’s just like the brave souls who shed their blood to defend freedom and democracy, isn’t it, Mr. Barr? Only, it ISN’T and NEVER WILL BE! One was a brutal war and the other is a legal hack returning so he can protect a president who is accused of obstructing justice on at least 10 separate occasions.

Twitter quickly lit up with well-deserved scorn for the so-called attorney general:

Note to Bill Barr of the @TheJusticeDept: The paratroopers on DDay risked their lives jumping into Nazi occupied France. Many never came home. Never compare yourself to the heroes of DDay. #SaturdayMorning Thoughts https://t.co/CXBumuHQaR

Today, William Barr works for Trump who has support of Nazis who endorse white supremacist rule

William Barr likened his arrival at DOJ to the D-Day landing at Sainte-Mère-Église on the morning of June 5, 1944.

He thinks that he’s a hero for helping to destroy the credibility of the DOJ.

The galling arrogance of Barr comparing his bureaucratic expansion of executive branch power to the deeds of heroes who died fighting Nazis puts him on par with his boss.

Wow. He’s as good at all-about-me-ism as his narcissistic boss, all while trivializing the experience and heroism of our D-Day heroes.

This is equal parts delusional, arrogant and idiotic.

Here’s a suggestion for William Barr: Never compare yourself to real heroes. You are not and never will be one. You’re a coward, just like the man who nominated you.