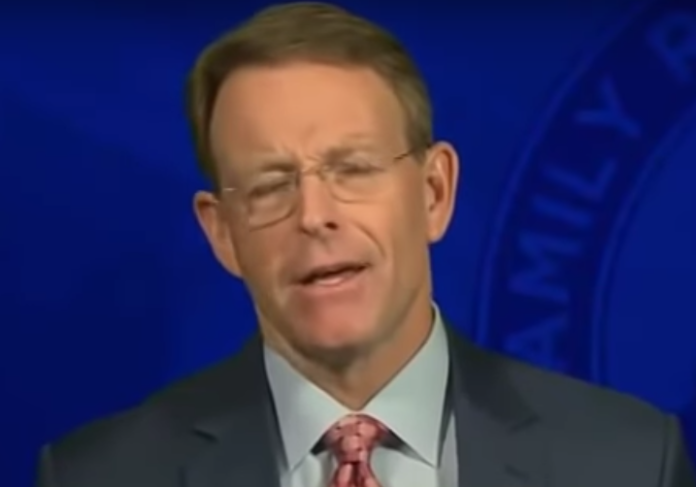 Family Research Council president Tony Perkins used Saturday’s mass shooting in Odessa, Texas, to attack science and liberals on Sunday during an interview on Fox News in which he also declared that we should be forcing religion on children.

In the last mass shooting in August, five people are dead and 21 wounded after a gunman went on a shooting spree in the Lone Star State on Saturday. This shooting follows the combined 31 deaths from mass shootings in El Paso and Dayton earlier in the month.

Obviously, “thoughts and prayers” are not working. Perkins agrees, but instead of focusing on the real problem, which is guns and lax gun laws, he doubled down on religion.

“At some point, we have to realize that we as a nation have a problem,” Perkins said during a Fox & Friends interview on Sunday morning. “And the problem is not the absence of laws, it’s an absence of morality.”

Perkins accused liberals of a “decades-long march through the institutions of America, driving religion and God from the public square.”

Studies repeatedly show that being religious or not has nothing to do with morality.

Yet, Perkins called for forcing religion, presumably Christianity, onto students in school.

“I agree, praying alone is not enough,” Perkins said. “It’s time to act. It’s not just about having a conversation about restricting those who should not have guns, criminals. But it’s also a discussion of a absence of a moral core in our culture today. We’ve taught our kids they come about through chance through primordial slime and then we’re surprised they treat their fellow Americans like dirt! It’s time we talk about the result of the left’s systematic march through our institutions, driving religious expression from the public square.”

Except liberals have not done that at all. Prayer has not been banned in public schools. Students can choose to pray if they want to, but it cannot be forced upon students by school administrators or teachers.

Also, evolution is science backed up by evidence while religion is purely about faith. And that faith cannot be forced upon students because they are protected by the First Amendment.

But Perkins droned on about telling kids that they are “created in the image of God” and said lack of religion is destroying morality.

“We’ve driving religion from our public life and we’re shocked that we no longer have morality and we no longer value human life,” he said.

In reality, the only thing driving people away from religion is religious hypocrites like Perkins who preach hate. You also can’t preach about morality and still support President Donald Trump, a serial adulterer and human rights abuser who incites violence and attacks people of color in racist diatribes.

It’s not a lack of morality in this country that is resulting in gun violence, it’s giving people with a lack of morality easy access to weapons of war. Perkins should be ashamed of himself for trying to use mass shootings to justify religious indoctrination.