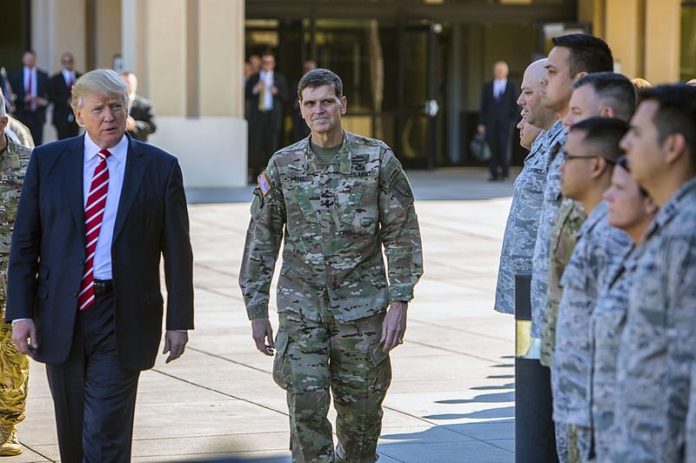 President Donald Trump’s claim that ISIS has been defeated in Syria is not shared by the highest ranking U.S general in the Middle East, Joseph Votel, commander of United States Central Command.

Trump infamously declared victory over ISIS in Syria in December while announcing his decision to withdraw American forces even though thousands of ISIS fighters remain and can regroup to retake hard-won territory and launch future attacks against the United States and our allies.

The decision resulted in Secretary of Defense James Mattis resigning in protest along with the top US envoy in the coalition, who slammed Trump for falsely declaring victory. Even Trump’s own intelligence officials agree that ISIS is not defeated.

This week, General Votel told CNN during an interview that he also disagrees with Trump’s premature declaration:

“When I say, ‘we have defeated them,’ I want to ensure that means they do not have the capability to plot or direct attacks against the US or our allies,” Votel continued. “They still have this very powerful ideology, so they can inspire.”

The four star general, whom Trump did not consult before making his statement, also pointed out that our allies in the region are not quite strong enough to keep ISIS at bay should we abandon them.

“They still require our enablement and our assistance with this,” Votel said. “We want (ISIS) to be able to be controlled or addressed by the indigenous partners, whether that’s the Iraqi security forces in Iraq, or the Syrian Democratic Forces in Syria, that when they are capable of handing this threat on their own, without our assistance, that will be another key criteria indicating to me that we have accomplished our mission of defeat of ISIS.”

Clearly, our partners in the region still need our help combating ISIS. Leaving now before the fight is finished guarantees that we will have to come back again and start all over, especially if ISIS launches attacks on American soil. If that happens, Trump will have blood on his hands because he surrendered to ISIS, grabbing defeat from the jaws of victory at a time when ISIS is at their most vulnerable. Our military needs to be allowed to finish the job, or kids who haven’t even heard of ISIS in our country will one day have to put their lives on the line to defeat an enemy that we should have defeated when we had the chance.