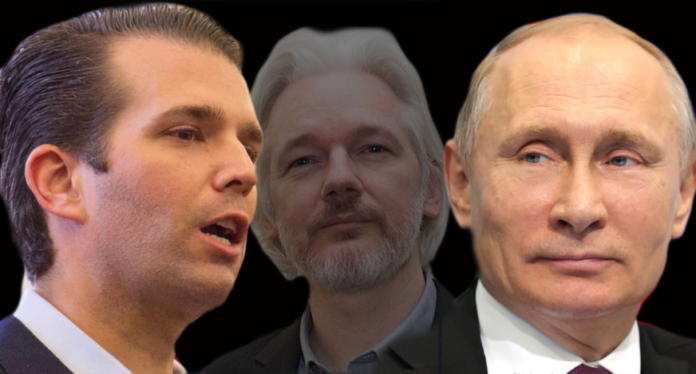 Late on Monday,  The Atlantic published a story that Trump Jr., with full knowledge of many top Trump officials, was actively communicating with Wikileaks before and after the election. This after a day of shocking revelations, including Jr.’s father, the President of the United States announcing that he believes Vladamir Putin when he says neither he nor the Russians meddled in the 2016 election.

In his most recent meeting with Putin while away on his tour of Asia, Donald Trump left many people aghast by initially wholly disregarding our intelligence agencies’ findings that Russia worked to elect Trump. Those same intelligence agencies have informed us that Russia was using Wikileaks as a means to dump illegally hacked emails about the Democratic National Committee.

Now it is known that Trump Jr. sought out the stolen and illegally collected information as well as disseminated information at Wikileaks’ suggestion. Trump Sr. was also encouraging what was going on, to the extent of mentioning Wikileaks over and over in the final month of the 2016 campaign. Donald Trump also appears to have responded to the information Donald Jr. was collecting, tweeting out a reference to Wikileaks minutes after Jr. directly communicated with the rogue organization.

All of them knew, and yet on October 14, Vice President Pence said “Nothing could be further from the truth” about the suggestion that the campaign worked with Wikileaks. In November, Hope Hicks denied any involvement with foreign entities, and in December, Kellyanne Conway denied contact between the Trump campaign and Russia.

A complete and damning timeline of the events is provided by CNN here.

Kyle Griffon, an MSNBC producer, tweeted the news about the total number of times Trump mentioned Wikileaks in the final days of the Trump campaign. NBC counted an astonishing 145 mentions. He was pushing the findings from Wikileaks, even though by June 2016, it was reported that the DNC believed it was hacked by Russian intelligence. Trump continued to deny Russian involvement and continued to lavish praise on how much he loved Wikileaks. Then on July 27, 2016, Trump publically called for Russia to hack Clinton’s emails, which he later tried to dismiss as a joke.

Trump mentioned WikiLeaks 145 times during the final month of the 2016 campaign, per NBC’s count. https://t.co/gvO9IesBU6

There are many more revelations about the contacts and interactions that all point to active Trump campaign participation one small degree of separation from Russia. This one small degree may have been thought to offer “plausible deniability” by the Trump campaign, but more and more, that deniability looks more like blatant corruption which is dangerous to the very survival of American democracy.

See the video below for a quick look at The Atlantic’s findings: