The United States Blues
Home Business Town That Allows Only Practicing Christians To Own Homes Confronted By Federal... 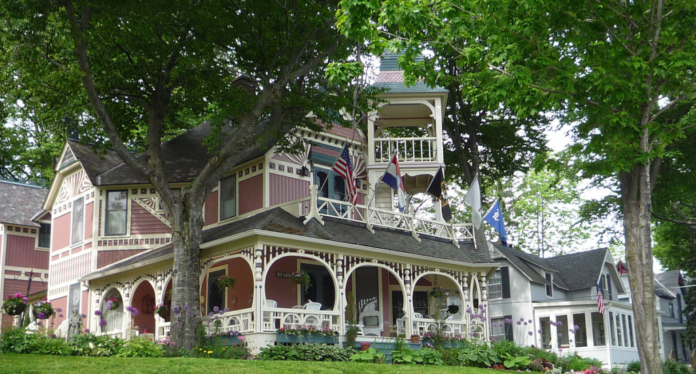 By now, most people are familiar with the case of the baker who refused to bake a wedding cake for a gay couple, claiming that his religious beliefs granted him an excuse to discriminate. Such cases may become more common since Trump created a “conscience and religious freedom” division in the Department of Health and Human Services under the purview of the Office of Civil Rights. Now imagine whole communities where such “religious freedom” could be used to deny home-ownership to people who aren’t practicing Christians.

Surely this new religious loophole wouldn’t lead to such a thing. Right?

Well, it turns out such a community has existed for 140 years, tucked away in an idyllic town on the Great Lakes called Bay View, Michigan with homes listed in the National Register of Historic Places.

Bay View started out in the late 1800’s as a summer university inspired by the “Chautauqua” movement taking place at Chautauqua Lake, New York. It was a Methodist summer school and camping ground that broadened to including adult education concerts, and social activities.

Though it had humble beginnings, today Bay View is an upscale resort town. Houses in the town are sold for profit by individuals with four percent directed to the Association.

Bay View was founded in 1875 by Michigan Methodists as a camp meeting “for intellectual and scientific culture and the promotion of the cause of religion and morality.” From its beginning, the Association has welcomed persons of any denominational affiliation who have desired to assist in perpetuating the Association’s principles and purpose.

While the community no doubt does welcome people of different denominations as visitors, a new report from The Guardian exposes their dirty little secret: “Only practicing Christians are allowed to buy houses or even inherit them.”

A bylaw from the 1940s was strengthened in 1986, requiring homeowners to present a letter from a Christian minister to prove their active participation in a church. The rule was first introduced by a lawyer from a nearby town with a well-established Ku Klux Klan presence.

“[…] documents from the time reveal a spirit of white, Protestant safeguarding. Employees or servants of all backgrounds were allowed to stay, but anybody else not fitting the white, Christian stipulations was given one night before being sent on their way.”

The town has remained almost entirely white, although the white-only clause was eliminated in the 1950’s, and a Catholic quota of 10% was also dropped over time.

The bylaw to allow only Christian homeowners must remain in place for a reason, right?

“They don’t have to be Trump voters to be wanting to protect a certain enclave. A lot of white Americans are deliberately blind to this,” said Tisa Wenger, professor of American religious history at Yale University.

Now the town, the Association, and a real estate company are facing a federal lawsuit from a dozen current and former residents who believe the “Christian litmus test” violates the Constitution, Michigan’s civil rights act, and the Fair Housing Act.

While some see it as a black and white case of discrimination, others in the community are defending the bylaws. Still, others thought it would “just take care of itself,” as an arcane law that is now outdated.

One man who wants to keep the laws in place doesn’t like the suggestion that the town’s association is may be bigoted:

“We accept anyone that wants to join the same way that Christ accepts anyone as Christian. We don’t discriminate against anything that you can’t change,” said Dick Crossland.

The implication here is if you want to live in Bay View, you can change your religious affiliation – to Christian.

It is mind-boggling, though, that Bay View has remained a Christian-only enclave in the 21st century. Surely this lawsuit is a slam dunk, except with Trump and evangelical Pence in the White House, the outcome of this case becomes less certain.

Consider this: a California judge just sided with the baker in the case of the gay wedding cake, ruling it protected by “artistic expression.”

Can a whole town be protected as an artistic expression? Let’s not give Trump or Pence any ideas…

For an idea of what Bay View is like, check out this disconcerting Norman Rockwell-esque video from the Bay View association Facebook page:

Should We Listen To Our Grandparents?