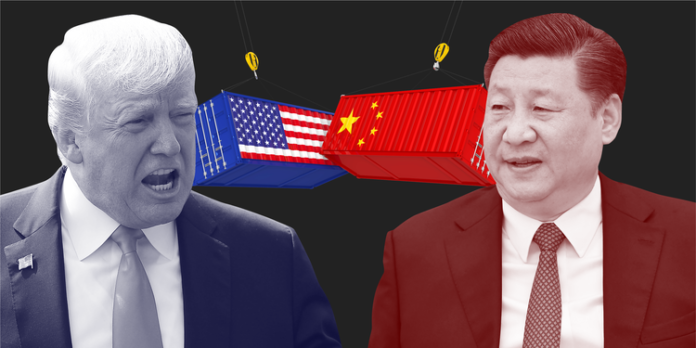 President Donald Trump imposed $200 billion worth of new trade tariffs on China this week, sending the U.S. stock market into a tailspin and leading to fears the Chinese will now retaliate with a package of tariffs that will be felt throughout the American economy.

With the trade war escalating and talks between the two nations at an impasse, a trade group is now warning that Trump’s foolish trade war threatens the jobs of at least 400,000 people in this country, Bloomberg reports:

The tariffs will “drive down exports, and suppress job gains for the industry by as much as 400,000 over 10 years. It will also invite China to hit back at American businesses, farmers, communities, and families,” said Kip Eideberg, vice president of government affairs for the Association of Equipment Manufacturers, which represents more than 1,000 U.S. makers of farm, construction and mining machinery.

“With producers already struggling with falling commodity prices, additional retaliatory tariffs on U.S. agricultural exports will have a chilling effect on equipment manufacturers,” Eideberg said in a statement after the penalties went into effect.

Among those hit the hardest by tariffs imposed by China are American farmers, who have seen demand for their products drop while prices continue to fall. That has forced many to take on new debt that could wind up bankrupting thousands of family farms across the nation. In five key 2020 battleground states — Minnesota, Montana, North and South Dakota, and Wisconsin — farm bankruptcies are surging to levels never seen before, according to the Los Angeles Times:

The pain in the fields is beginning to intensify. Farm bankruptcies in Wisconsin, Minnesota, Montana and the Dakotas have spiked in the last two years, reaching 103 in 2018, according to the Federal Reserve Bank of Minneapolis. That’s the highest level since 2010, during the post-recession hangover. “This trend has not yet seen a peak,” the Minneapolis Fed said in November.

Ironically, Trump won four of those fives states in 2016, but all could be up for grabs in 2020 if the trade war continues to cause deep economic pain.

Trump has repeatedly proven that he has no idea how tariffs work, claiming that China is paying them:

Talks with China continue in a very congenial manner – there is absolutely no need to rush – as Tariffs are NOW being paid to the United States by China of 25% on 250 Billion Dollars worth of goods & products. These massive payments go directly to the Treasury of the U.S….

But tariffs are just another tax on consumers. They eat into people’s earnings and wind up causing them to have less money for other things they might want to purchase. Tariffs also cause consumers to put off making large purchases of products such as appliances or a new car because of the sticker shock imposed by the trade war Trump has initiated so he can appear tough.

It would be nice to think that the president will see the error of his ways and end his trade war, but as we learned this week thanks to the New York Times, Trump is an abysmal failure as a businessman and lost in excess of $1 billion over the course of ten years. Now he seems determined to plunge this country into a similar economic morass.