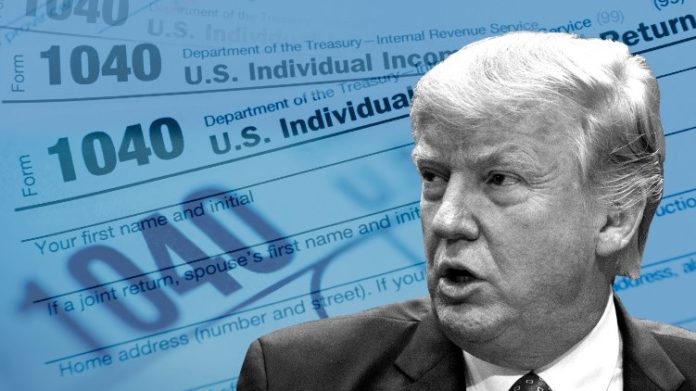 House Democrats have already indicated that they have every intention of requesting President Donald Trump’s tax returns, and the administration has formulated a strategy to delay that release, according to a new report from Politico.

The strategy? Delay and court action:

“Trump’s Treasury Department is readying plans to drag the expected Democratic request for Trump’s past tax filings, which he has closely guarded, into a quagmire of arcane legal arguments.

“At the same time, officials intend to publicly cast the request as a nakedly partisan exercise. The two-pronged scheme was developed by a handful of top political appointees and lawyers inside the department — with the ultimate goal of keeping the president’s past returns private, according to four people familiar with the administration’s approach.”

Part of the overall White House strategy is to argue that Democrats will inevitably leak the president’s tax documents if the IRS gives them the requested documents.

But since Congress has the right to make such a request for anyone’s tax information, the issue could get dicey if the IRS refuses to comply, according to George Yin, a former chief of staff on the House Joint Committee on Taxation:

“What happens if the Treasury secretary just doesn’t answer or sends back a note saying we refuse to do what you are saying? To my knowledge, that has never happened. … We are essentially in uncharted territory if he refuses.”

To Court We Go

If indeed Treasury Secretary Steven Mnuchin digs in his heels and refuses to comply with a valid request for the president’s taxes, expect a legal fight. And while that might delay the process, it seems likely that most federal courts would rule in favor of Congress, according to Yin, who is now a professor of law and taxation at the University of Virginia:

“From the standpoint of the law, it could not be more straightforward or clear. That is the easy part.”

What the Law Says

IRS code states that the three congressional committees responsible for taxes have the ability to request the returns of any individual or business, Politico notes:

“Often, the Senate Finance Committee or House Ways and Means Committee will request returns during an investigation to check a certain deduction, or type of spending — without anyone ever knowing the committees accessed them.

“But whatever the members or staffers find must remain private — and that’s where the request of Trump’s returns becomes potentially tricky for Democrats. A related section within the Internal Revenue Code says any federal employee who leaks tax information is committing a felony, punishable by up to five years in prison.”

“This is the beginning of a court case. I think the idea here is to avoid the emotion of the moment and make sure that the product stands up under critical analysis.”

However, the fact that the White House wants to slow walk releasing Trump’s taxes raises a much larger question: What is Trump afraid will be found if his tax returns are subjected to close scrutiny?