The United States Blues
Home Economics Treasury Secretary May Be Next Cabinet Member To Get The Boot: Report 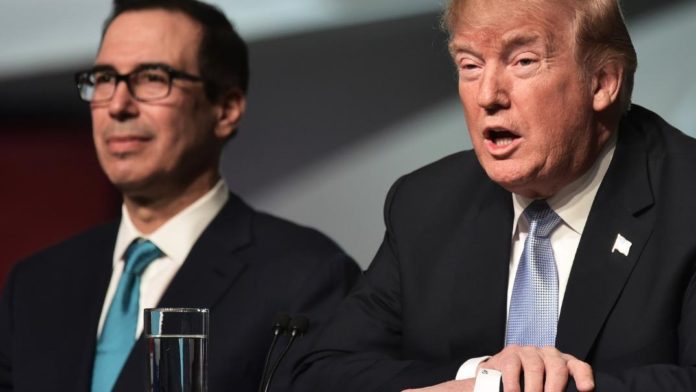 With the stock market now in negative territory for 2018 and no good economic news on the horizon, it’s beginning to look like Treasury Secretary Steven Mnuchin may well be the next cabinet member who will find himself on the chopping block, CNN reports:

“President Donald Trump’s frustration with Treasury Secretary Steven Mnuchin is ratcheting up further after markets suffered their worst Christmas Eve drop ever following Mnuchin’s attempts to calm Wall Street failed, according to a source close to the White House.

“The source told CNN that Mnuchin could be in ‘serious jeopardy’ with Trump, who regularly rages at Cabinet members he feels have made mistakes before he cools off.”

Mnuchin’s big mistake appears to be the call he made to the heads of top American banks over the weekend while he was vacationing in Mexico. That effort to calm the already jittery American stock market backfired badly on the Treasury chief. A day after his phone call, the markets had their worst Christmas Eve showing in history, shedding almost 3 percent of their overall value.

Despite all the chatter about Mnuchin’s job being on the line, Trump said Tuesday that he has complete confidence in his Secretary of the Treasury:

However, CNN reports that their source warned:

“Mnuchin is under the gun.”

The White House sent White House Council of Economic Advisers Chairman Kevin Hassett out to face reporters Wednesday, and he too asserted that Mnuchin’s post is safe:

“I am highly confident that the president is very happy withy Secretary Mnuchin. I’ve met with them together in the Oval (Office) many, many times and they have a very collegial and productive relationship.”

Trump is also said to be very unhappy with Federal Reserve chairman Jerome Powell, who he appointed, for daring to raise interest rates to forestall inflation. Trump has suggested he may meet with Powell after New Year’s.