The United States Blues
Home Politics Congress Treasury Secretary Steve Mnuchin just got a lesson in economics from an... 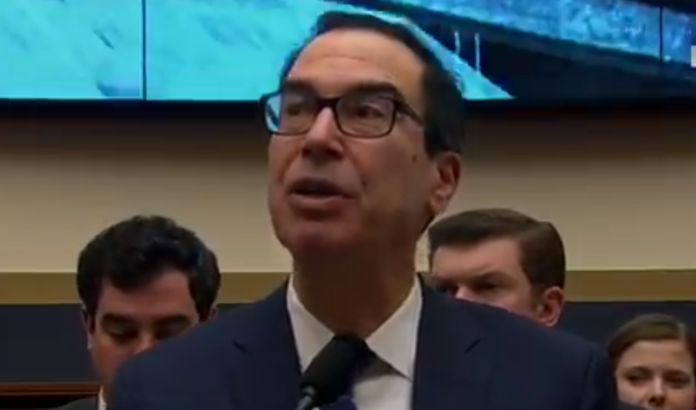 Secretary of the Treasury Steve Mnuchin tried desperately to defend President Donald Trump’s disastrous trade war Wednesday morning during a hearing of the House Financial Services Committee, but a Democratic member of the committee set him straight on the basics of trade, tariffs, and who pays the bill.

Rep. Cindy Axne (D-IA) asked Mnuchin about the impact tariffs were having on both American companies and consumers. When she asked if companies would pass on the cost of the tariffs to those buying products, the Treasury Secretary tried desperately to evade answering. Finally, Axne inquired:

“Do you agree that American consumers will be paying more as a result of these tariffs?”

“I don’t necessarily agree with that and that’s something we’re monitoring very carefully.”

That’s when Axne began using facts to pin Mnuchin down:

“So you disagree with all of our key retailers in the country, the experts who say that a tariff is most likely passed on to consumers, that’s historically what happens, you disagree with that as the secretary of the treasury?”

The Treasury chief finally caved in, though he also claimed that Trump would make sure the costs wouldn’t allow tariffs costs to be paid solely by consumers:

“There may be a small number of items where the tariff may be passed on.”

Axne wasn’t having any of Mnuchin’s double talk, reminding him:

“I think it’s the importers who make the decisions on that! It’s their products that they’re importing!”

.@RepCindyAxne: Are you in agreement that American consumers will pay more as a result of tariffs?

MNUCHIN: I don’t necessarily agree with that, no.

AXNE: So you disagree with all of our key retailers and economists who say they will?

Trump has often said the Chinese pay the trade tariffs. On May 9, he told reporters:

Tariffs are “paid for mostly by China, by the way, not by us.”

But as Politifact notes, that’s simply not true:

“It is inaccurate to say that ‘countries pay’ tariffs on commercial and consumer goods — it is the buyers and sellers that bear the costs,” said Ross Burkhart, a Boise State University political scientist. “Purchasers pay the tariff when they buy popular products. Sellers lose market share when their products get priced out of markets.”

If it costs a company more to import or export their product, they pass that cost along to consumers, which is just like an additional tax being placed on that purchase. So Mnuchin — much like his boss — is lying.