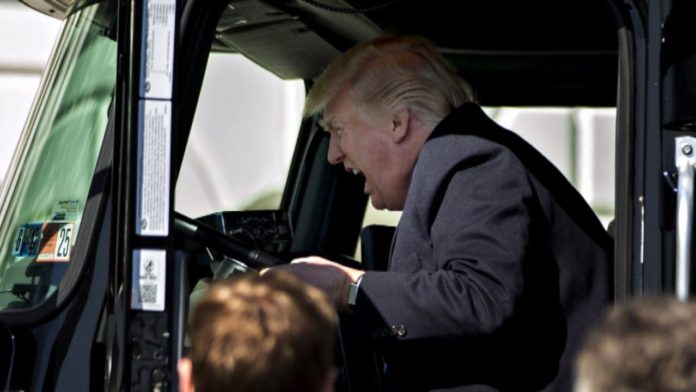 Though many truck drivers ardently supported and voted for Donald Trump in the 2016 election, they’re not exactly delighted with his ongoing trade war, and some are even warning they may not vote for Trump when he runs for reelection next year, according to Business Insider.

Morris Coffman has been a trucker for 35 years and considers himself a staunch conservative, but here’s what he had to say when asked about the incumbent president:

“[Trump] is absolutely a moron. His idiotic ideas will tank the economy even further.”

Just how passionately Republican and pro-Trump are truck drivers? An Overdrive magazine survey from 2016 showed that 75 percent said they planned to vote for Trump. Only 66 percent voted for GOP presidential nominee Mitt Romney in 2012.

Now, however, many truck drivers are incredibly critical of Trump:

“He has not affected our business in a positive way,” said one truck driver who asked to be quoted anonymously for fear their small business might suffer. “He’s killing our business. If consumers aren’t buying, then there is no demand. This really isn’t about my political leanings — it’s pure business.”

And it’s not just the trade war that’s hit truckers hard and left some regretting their vote for Trump.

The 2017 tax bill wound up causing many truck drivers to wind up paying hundreds in extra taxes, thanks mostly to a change in per-diem laws:

Dennis Bridges, an accountant who specializes in doing taxes for truckers, told Mother Jones in April that 75% of his clients saw an unusually large tax payment, and about 20% had to fork over more than $5,000.

2018 was a relatively good year for truckers, but 2019 has been a “bloodbath” in the words of Coffman, who say that since late last year, the industry has been in what can only be called a recession.

How bad have things gotten for truck drivers? According to transport research groups:

The volume of trucks purchased in July fell to its lowest level in nearly 10 years. The number of loads needing to be moved in the spot market tumbled by 37% this July compared to one year ago, and rates have fallen by as much as 18%.

Truck driver JL Sims laid the blame for the recession in the trucking industry squarely at Trump’s feet:

“The truth about the rates being so low is Trump’s trade policies. Manufacturers are scared. Last month’s manufacturing jobs numbers finally began to reflect the reduced production. Everyone looks at the unemployment rate and thinks, mistakenly, that the economy is in great shape. Manufacturing tells the real story.”

In short, truckers feel like they’ve been let down by a man they eagerly cast their ballots for three years ago, with Coffman providing this bit of advice to the president:

“You can not bully your way to a good economy.”