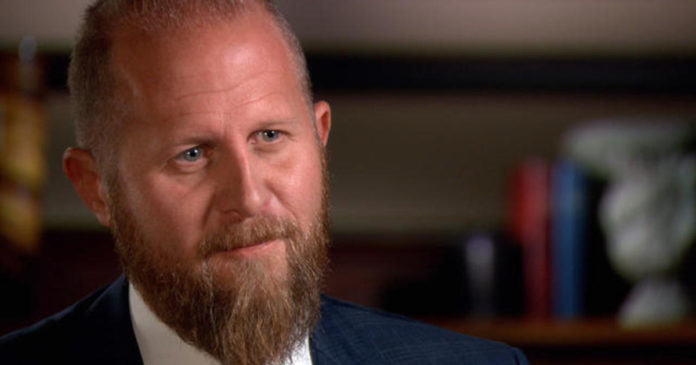 You may not be familiar with the name Brad Parscale, but he’s the campaign manager for the Trump 2020 re-election effort, which is somewhat like being the activities director aboard the Titanic seconds after the hitting the iceberg.

Parscale though it would be a great idea to go on Twitter and urge freshman House Democrats to “turn on” Speaker of the House Nancy Pelosi (D-CA) and support President Donald Trump’s ludicrous plan to spend billions of dollars on a border wall:

Data clearly shows that if most Freshman Democrats don’t turn on @SpeakerPelosi and vote for the wall and stop being a rubber stamp, they will not have a chance to see their Sophomore class. @cnn and @msnbc ignores this fact because they are complicit in playing them.

Note that Parscale didn’t bother to provide any “data” that supports his specious claim, and many Twitter users noted that in their replies to Parscale, who later went back and posted a link to a poll conducted by Public Opinion Strategies, which describes itself as a “Republican polling firm.”

But a close look at the poll cited by Parscale shows just how shaky support for the wall is, even in a biased survey conducted by a GOP pollster: Only 53 percent of voters in the poll say they support support “building a border wall or barrier to improve security between the US and Mexico.”

In contrast, a more accurate and fairly conducted poll from Gallup reveals:

It certainly looks like Parscale is using bogus data to bolster his completely make-believe point. And if he actually thinks House Democrats who were elected with the help of Nancy Pelosi are suddenly going to go against her on the wall, then he clearly doesn’t understand much of anything about loyalty. That’s not surprising since Parscale works for a man who has no loyalty to anyone.

Nice try, Brad, but we’re calling bullshit on your pathetic attempt to get a wall that no one wants.