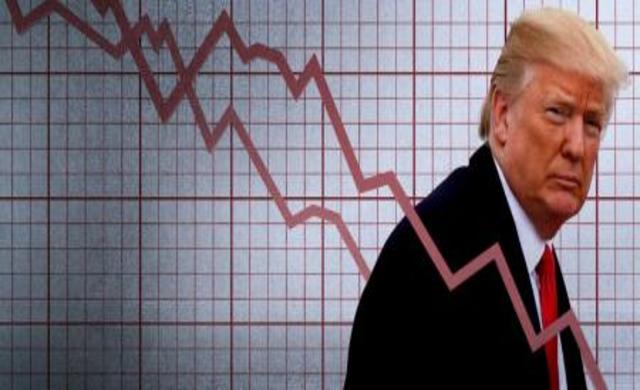 President Donald Trump took a break from attacking sanctuary cities on Sunday to attack the Federal Reserve, which he is trying to blame for any economic slowdown that occurs on his watch.

Trump has been trying to politicize the Federal Reserve for months now, including by nominating Stephen Moore and Herman Cain to be his two lackeys on the Board, who would likely vote for monetary policies that would benefit him politically in the short term while harming the economy overall in the long term.

The economy has been growing and improving due to former President Barack Obama’s policies beginning in 2010 and have continued to this day. But Trump’s disastrous tax cuts for the rich, his government shutdowns and his global trade wars have caused fears of a recession.

Rather than take responsibility for these recession fears, Trump is desperately trying to shift blame to the Federal Reserve, arguing that rising interest rates have prevented the stock market from being thousands of points higher than it is and that GDP would be routinely over four percent.

If the Fed had done its job properly, which it has not, the Stock Market would have been up 5000 to 10,000 additional points, and GDP would have been well over 4% instead of 3%…with almost no inflation. Quantitative tightening was a killer, should have done the exact opposite!

No, the Federal Reserve made the right call, and even Wall Street supports the monetary policy decisions.

According to Marketwatch, there are two seriously good reasons why the Federal Reserve would raise interest rates during an economic upturn like the one we’ve been experiencing over the last eight years, including the fact that when the next recession does come, the Federal Reserve can lower rates again to combat it.

An extremely low real interest rate can cause a variety of serious problems. Businesses respond to the low cost of capital by taking on excessive debt. Banks and other lenders reach for yield by lending to low-quality borrowers and imposing fewer conditions on loans. Portfolio investors can drive up the price of equities to unsustainable levels. Governments are induced to run large deficits because the interest cost of servicing the resulting debt is relatively low.

A second reason for raising the interest rate is that the FOMC needs a higher level now so that it can reduce interest rates later, during the next economic downturn, when it needs to stimulate demand. The current expansion, one of the longest since World War II, has now lasted 114 months since the upturn began in June 2009. Although expansions don’t die of old age, there are enough warning signs — including falling equity prices, weakness in the housing sector, downturns in major European countries, and the uncertain level of U.S. exports — to indicate that the next recession could begin during the next two years.

So, raising rates makes perfect sense. If Trump had his way, the rate would always be low and then the Federal Reserve would not be able to lower the rate when the next recession hits. Basically, Trump is trying to undermine the Fed’s best tool for dealing with recessions, and that’s bad for the economy and the American people.

Besides, the Fed has only raised the rate by a quarter percent this year and has announced there will be no more raises in 2019. The current rate now stands at 2.5 percent, which gives the Fed wiggle room to lower it during the next recession.

The fact is that Trump is upset because the Federal Reserve is doing what’s best for the economy instead of what’s best for his re-election chances in 2020, which Trump himself shot all to hell by enacting trade and tax policies that have backfired. Thankfully, the Fed refused to let Trump dictate monetary policy. Because if they did, that would backfire, too.