The United States Blues
Home News Trump accuses all Democrats of being anti-Israel and anti-Jewish in a single... 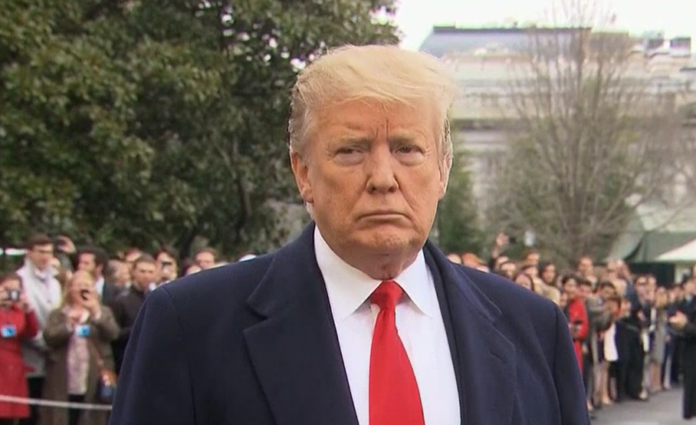 President Donald Trump once again attacked Democrats on Friday by charging them with being anti-Israel and anti-Jewish while speaking with reporters outside the White House.

Trump has repeatedly accused Democrats of anti-Semitism, especially after Rep. Ilhan Omar (D-Minn.) criticized Israel and the pro-Israel lobby over legitimate concerns that the lobby has too much influence over Congress and the White House, concerns that have only become more legitimate after Trump recently recognized more illegally seized territory as belonging to Israel in violation of international law.

“The Democrats have very much proven to be anti-Israel,” Trump said. “There’s no question about that and it’s a disgrace. I mean, I don’t know what’s happened to them but they are totally anti-Israel and, frankly, I think they’re anti-Jewish.”

Again, Democrats are not anti-Jewish or anti-Israel simply because they criticize Israeli policies. No Democrat has argued that Israel should not exist, but a foreign nation having so much influence in our own politics is incredibly concerning. The pro-Israel lobby donates millions of dollars to GOP political campaigns, which often results in American lawmakers voting for any legislation that Israel supports and against any legislation that Israel opposes. That’s dangerous and takes power away from the American people. After all, this government works for the American people, not the Israelis.

Trump is also a hypocrite because he is ignoring his anti-Semitic remarks over the years.

This is clearly part of Trump’s strategy to promote “Jexodus,” a group his campaign created in a desperate effort to convince Jews to abandon the Democratic Party, an effort that has largely failed thus far since nearly 80 percent of Jewish voters supported Democrats in the 2018 midterms, Trump’s disapproval rating among Jews stands at 75 percent and 34 of the 36 Jewish members of Congress are Democrats.

Basically, Trump is accusing Jewish Democrats of being anti-Jewish. If anyone is anti-Semitic, it’s Trump.